Hussein's execution will be remembered as a case of America destroying an Arab leader who no longer obeyed his orders from Washington.

Email ThisBlogThis!Share to TwitterShare to FacebookShare to Pinterest
http://www.alternet.org/waroniraq/46093

This is the best article I've read on the USA and Saddam. What can i say read it agree, read it disagree but at least read it and expand your mind.

Email ThisBlogThis!Share to TwitterShare to FacebookShare to Pinterest
Larry King announced recently on his show to Roseanne Barr that he has never used the internet.

Barr said King would love the internet if he tried it. King replied, “I wouldn’t love it. What do you punch little buttons and things?” Barr even offered to show King how to use the Internet. King declined. Watch it:
http://thinkprogress.org/2006/11/15/larry-king-internet/

How is it that a figurehead of American of American news culture can be so out of touch with reality and yet still be considered a 'source' of knowledge.

This from the country that every cable company in the country has refused to carry Al Jazeera news as there is 'no demand'.

Email ThisBlogThis!Share to TwitterShare to FacebookShare to Pinterest
A while ago I was asked for some thoughts on the life of an aussie expat for a senate submission report and was pleased to provide some thoughts about why I'm working working overseas at the moment....I needn't have bothered.

SCG Australian Co-ordinator John MacGregor said, “A number of verysensible proposals that the Government has rejected would not beexpensive to implement but would make a big difference to the lives ofmany ordinary overseas Australians. Although the Government hasdismissed so many of the Senate Committee’s good ideas, it has to date wholly failed to put forward its own comprehensive strategy plan or blueprint for this country’s future engagement with its million-strongdiaspora. We can only assume that the Government finds such a step unnecessary because most of those in the diaspora are disenfranchisedunder Australian electoral law and have no power at the ballot box.”

I think the bigger issue to consider is the loss of these people as a resource, sure we'll come home and visit, probably buy an investment property or two, but at the end of the day Australia is missing out more from our absence than we are missing from being overseas.

Email ThisBlogThis!Share to TwitterShare to FacebookShare to Pinterest
Life in Australia is ..... hanging out for a BBQ with friends on a sunny summer Sunday afternoon. 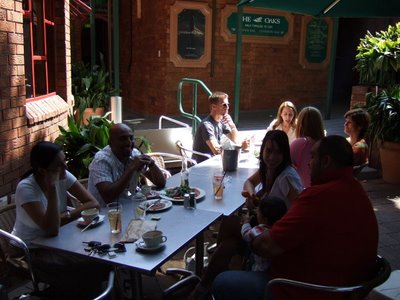 Good friends like you make it hard to go back to NY.