Email ThisBlogThis!Share to TwitterShare to FacebookShare to Pinterest
If you were alive in the 90's you're in for a shock......


I had no idea Natalie Ibruglia "Torn" was a cover.

Off to go find more Ednaswap (btw if you like them check out Bettie Serveert one of my Top 20 bands - start with Dust Bunnies then Bare Stripped Naked )
Posted by Dean Collins at 7:13 PM 0 comments

Blockchain, Bitcoin, and smoke and mirrors

Email ThisBlogThis!Share to TwitterShare to FacebookShare to Pinterest
I'm reading this article....- https://www.fastcompany.com/3067778/the-blockchain-is-going-to-save-immigrants-millions-in-remittance-fees 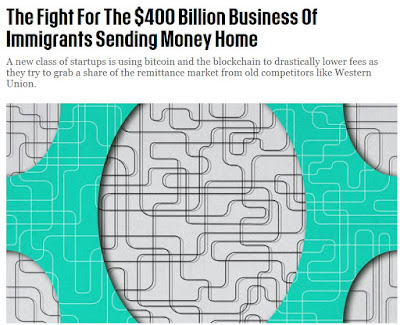 I'm the first person to say one of my best attributes is I'm always happy to ask the dumb questions to get to the bottom of a topic/problem…..but seriously is it just me as “I’ve never understood how Blockchains will help make money transfer more efficient”?

eg you still need someone “locally in Africa” to receive the bitcoin transfer and hand over the cash……..which means they have to obtain the “local cash” from somewhere – either by selling local bitcoin to someone “in Africa” or more likely…”selling the bitcoin back overseas and getting their hard currency outside of the country….but then needing to send it back to themselves locally.

I hope that makes sense.

The 2%-10% of “fee” or “Cut” that they charge for offering the “local cash” is to pay for “interest in having cash sitting around” OR the process of changing far end cash into local cash.

Sure if you can buy a goat in Africa with Bitcoin then having your hard working son/daughter in America sending you bitcoin to buy said goat is a good thing as “zero local fee” BUT…..then this is a bitcoin ecosystem issue and NOT a blockchain related issue.

Like I said….happy to be proven wrong and lots of smart people who can maybe explain what I’m missing better.

I just feel a lot of people use “technical jargon” like “blockchain” because they want to sound smart instead of saying “distributed ledger”….otherwise known as excel spreadsheet.....which I guess doesn't raise investment funding as fast.

Samsung are offering a $425 rebate to Note 7 customers

Email ThisBlogThis!Share to TwitterShare to FacebookShare to Pinterest
http://www.zdnet.com/article/were-you-a-samsung-galaxy-note-7-owner-get-almost-half-off-on-a-note-8/ 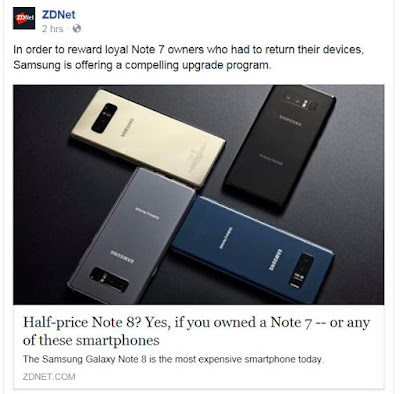 
How about you refund me the cost of the S7 i purchased 8 months ago then i pay full price for the Note 8 which would make me whole before you and T-Mobile decided to brick our Note 7's against our wishes.
Posted by Dean Collins at 6:58 PM 0 comments

Betting on the house

Email ThisBlogThis!Share to TwitterShare to FacebookShare to Pinterest
Australia's real estate obsession driving us to the brink.

"I think it's a powder keg." says investment consultant "The statistics are startling. Australians are carrying more personal debt than ever before".

For every one dollar earned, on average, Australians have nearly two dollars of debt. We hold the dubious position of having the second highest level of household debt in the world. Much of this stems from our obsession with buying real estate. http://www.abc.net.au/4corners/stories/2017/08/17/4719901.htm 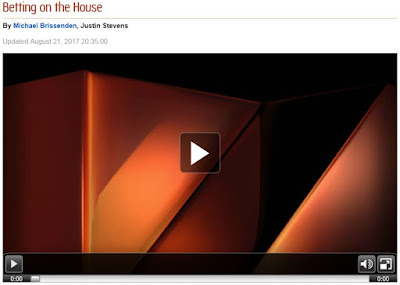 So on the whole......i'm 50/50 about this, on one hand it was full of gotcha journalism and the most ludicrous cherry picking of facts. Sydney is not Ireland or Detroit - happy to discuss specifics on why but you've probably already heard them from me before.


On the other hand......its good to give the general public warnings but lets face it when you have the ANZ pensioner who receives a cold call and 48 hours later is signing of mortgage on an investment property in QLD with no income....seriously what was she thinking?


She deserved to be separated from her money (a fool and their money)....and no amount of warnings will help her.


In addition how many investors did they film and reject before they settled on the clip of "Beavis and Butthead - Pina Colada" investors...?


Seriously if you are in your 40's and only have $300k for your retirement any actuarial table with a 4% drawdown will tell you that you have a retirement income of around $12k pa in addition to your superannuation (or in their case most likely pension) or about $115pw per person.


You arent going to be travelling around the world drinking pina coladas on $115pw.
(There is a longer post about Beavis and Butthead on propertychat.com.au and details on their financials are on the Binvested website).

Yes Syd and Melbourne is expensive.

Are mining company investors also crying into their beer that they over invested on margin and got a margin call??

Likewise.....neither should property investors be crying foul and claiming ..."the banks mislead me your honor and i was a poor naive victim of their trickery".

One final point i do want to make that "wasnt really highlighted by Four Corners" about our industry experts.

Why do you think they are appearing on TV talking about the future potential crash of Aussie property".....
This below was from a 2016 post

"The dream run is about to end. Price to income ratios are very high,” Mr Tepper said. “Anyone with a pulse could essentially get a mortgage,” he said.​

Hempton discloses has a short on the Australian housing market. Tepper has told 60 minutes, he will probably do the same.​"

Yep Jonathan Tepper – founder of London-based research house Variant Perception, known for his bearish views on the housing market has a short position and will make money when the Aussie market crashes.....

But hey what do i know.
Posted by Dean Collins at 7:16 PM 0 comments

Filed under....where have you been and why didnt i do this sooner


Among its many awesome features, Microsoft Outlook allows you to easily map a contact's address using Bing Maps, making it simple to find their location. If you would rather use Google Maps instead, a simple registry edit will fix that……
- https://lifehacker.com/use-google-maps-instead-of-bing-for-contacts-in-outlook-1561303707 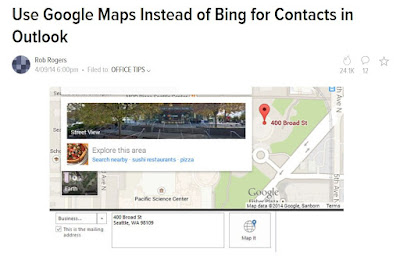 Where have you been all of my life…..very happy to have found this. 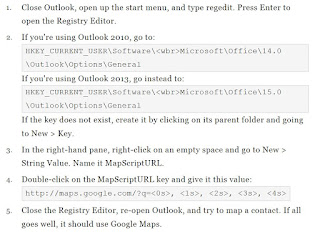 Email ThisBlogThis!Share to TwitterShare to FacebookShare to Pinterest
As an Australian before I moved to the USA I would have chuckled reading this article in the SMH - http://www.smh.com.au/business/world-business/for-doomsday-preppers-the-end-of-the-world-is-good-for-business-20170813-gxvfri.html 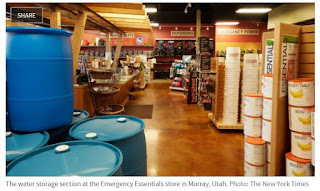 How loco are those Americans....what do they think is going to go wrong.

Having lived here in NYC for a few years I now understand how "out of the loop" and safe Australians feel. Our geography is a blessing and a curse.

So feel free (and rightly so) to feel superior in your safety Australia, but remember decay and change "is" the status quo. You only have to ask an older person in Europe about "stable govt" and do they think they could see yet another change within their lifetime?

There are currently 4m people in Sydney..........and the food supply in Coles and Woolworths has a 72 hour turnover.

How many of those 4m could grow and feed themselves for a month should some kind of widespread event occur there?

Do I prep....you'll never know but I do know that the average human requires 3 liters of water per day (+2 liters for sanitary) and the average human will consume 50,000 calories a month so for a month....you could store everything you need under a single box spring mattress.

But hey....lets joke about NK and how loco preppers are (btw I also think NK is a joke.....but lots of other things go bump in the night).

BTW don't have enough space for 1x2x0.2 storage then get yourself a Waterbob from Amazon in the very least - http://bit.ly/WaterBob

Email ThisBlogThis!Share to TwitterShare to FacebookShare to Pinterest
Would you cryo if it was cheap enough? 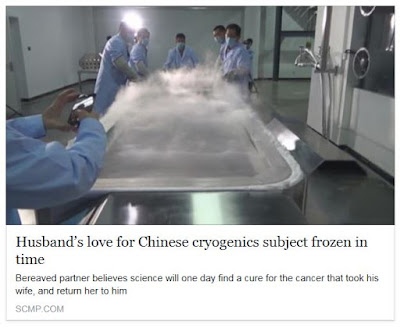 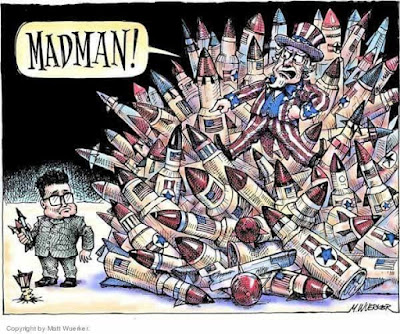 The US has 800 military bases in 63 countries worldwide, and military personnel presently active in 156 countries.

The US has been at war or in a military conflict for 224 of its 241 years in existence.

The US is the only country that has ever dropped an atomic bomb on a population, killing about 200,000 people in Hiroshima and Nagasaki.

Email ThisBlogThis!Share to TwitterShare to FacebookShare to Pinterest
Great challenge for people to consider taking up :)


We are so far removed from where our food comes from I think it would be a huge game changer for society to ground us back to reality. 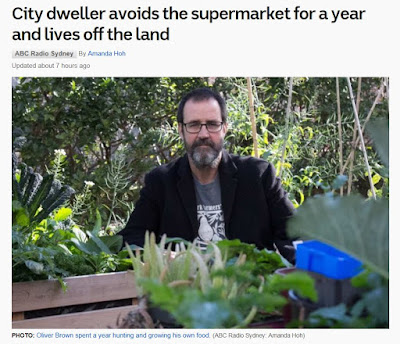 Posted by Dean Collins at 9:45 AM 0 comments

Email ThisBlogThis!Share to TwitterShare to FacebookShare to Pinterest
Still think that market drop is coming....? 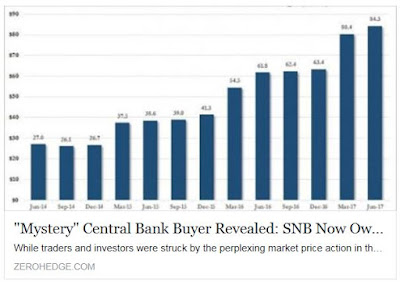 Email ThisBlogThis!Share to TwitterShare to FacebookShare to Pinterest
Doesn't really tell you anything you shouldn't already know.....but at least it does mention the 2012 near miss.