Email ThisBlogThis!Share to TwitterShare to FacebookShare to Pinterest
I've always been curious about this myself so when I saw it posted I wanted to pass this info on.

These figures show two things: How little is spent on production and the artist, and how much
goes to the retailer and the record label, since the book was released,
the cost of physical CD production has plummeted due to advances in CD
mastering technology, as well as decreases in prices of the materials
used in CDs themselves. Indeed, a common CD package may cost somewhere
between six and 50 cents to produce, depending mostly on the amount
and quality of liner-material.

P.S. Just had someone email me this link, worth the read
http://www.negativland.com/albini.html
Posted by Dean Collins at 8:40 AM 4 comments

Email ThisBlogThis!Share to TwitterShare to FacebookShare to Pinterest
As some of you might already know JavaOne will be happening in San Francisco in 2 weeks time http://javaone/sf

I wanted to draw your attention to an interesting company that will be exhibiting there called Savaje more details here http://exhibitor_id=5051


In summary Savaje is a brand new Java mobile phone OS that is highly programmable and customizable it has been awarded device of the show
http://www.savaje.com/show_device.html

There are a number of undisclosed hardware manufacturers who have signed on to offer hardware and undisclosed carriers will announce their involvement at the show launch.

Now what does this have to do with you; lots.

Basically at the show Savaje will be offering the first JavaOS handsets and appropriate SDK’s for developers who want to build their own Java applications to run on these handsets.

You can now write an application that will run on your mobile phone and be able to communicate over the data channel to external devices and applications.

I think with the wealth of development talent in the community we should be able to build some interesting apps that operate with Savaje.

For far too long mobile functionality has been a walled garden without the ability to implement perfectly beneficial custom applications – I think that this company might be able to offer us something interesting and exciting.

Important point to note – I don’t work for Savaje – I cant provide any more information than I already have.

I will however be working on the Savaje stand for the 3 days of the exhibition.

I cant say who yet but I’m working with an as yet un-nameable Savaje development partner exhibiting on the stand.

If you are going to the show please feel free to come up and say hi when you visit the Savaje stand. Hope to see you there.

Email ThisBlogThis!Share to TwitterShare to FacebookShare to Pinterest
It's stuff like this that I love living in NY for;

People here are so creative and intelligent (in a fun way).

Last Spring I received an email from someone who had heard about us on This American Life. He wrote:There's a scene I've been wanting to pull off, but I don't have the manpower. Feel like helping?This is the gist: you know The Strand? (I work there). Know the bag check? As you can imagine, with all those bags and coats and things, people leave their cell phones with the guy. Occasionally they go off.What I'm thinking is, you get a group of people, thirty or so, who all come into the shop and check their bags with their phones in 'em. At some later point, every single phone checked into the bag check starts to ring at the same time. It'd be bedlam.Like to help?

Now you would think why do this....because you can, because it beats staying at home watching tv, because...well because.


The participants didn't know ahead of time what they would be doing; they were just told to bring a backpack and a cell phone. After everyone had arrived, I explained the mission to the group. 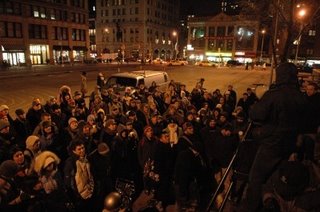 The first step was to divide everyone up by cell phone brand. In addition to creating a cacophony of 60 phones going off at once, I also wanted to have different sections play at different times, like a symphony. Instead of the "string section", we would have the "Samsung section". 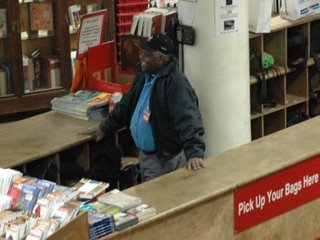 It sounds like it was all good fun and no one got hurt.

I know that there are a lot of these things also called "Flash Mobs" happening all over the world these days - you should check it out......you might enjoy yourself and lets face it what are you going to miss apart from some Law & Order reruns.

Reach Out While You Can

You were a good friend. You will be missed.


I have just received a call from a friend of mine in Australia that a schoolhood friend of ours named Goran Markovski died in a car accident yesterday.

His car left the Appin Road at Picton in NSW at high speed, he died instantly on impact.

Goran and I walked home from high school each day for about 3 years, an accidental friendship of nothing more than time and geography.

I learnt a lot from him. A lot was discussed between us over those years.

There was a weird turn of events about 5 years later. Those of us who know us both well know what happened. We didn't really talk much after that, I moved away - he moved overseas, I moved back and got married and was busy with 'life'.

Years had gone past but if I saw him standing on the street tomorrow I would still count him as my friend.

Some of you know that I was back in Australia recently. I wasn't there for long. Just over a week and I was busy with friends and work appointments as I hadn't been home in 2 years.

Goran lived less than a 5 minute walk from my house.

I knew where he lived.

I knew from mutual friends that not everything was ok with Goran.

I knew he could use some help.

You'll read this and you'll do whatever it is that you were going to do. One piece of advice, pick up a phone and call someone, it's not important who.

Email ThisBlogThis!Share to TwitterShare to FacebookShare to Pinterest
http://alwayson-network.com/Top100

Well it's just been announced for another year.....I guess my company will make it next year :)

In case you dont know what it is, they are kind of like the academy awards for tech companies. It's recognition by their peers that they have achieved something beyond the extraordinary.

It's a long list but it's worth spending some time looking at these companies as they will be changing how you do business this year (and next).

Email ThisBlogThis!Share to TwitterShare to FacebookShare to Pinterest
This is one of those projects that can only be done by companies that have money, lots and lots of glorious money.

So once again it's the time of year where Google run their Summer Of Code mentoring program.

Basically it's this super cool concept where Google offer $4,500 to students who want to develop code over their summer break.

The great part about it is that the code is then released for free to the Open Source community as code that anyone can use/implement.

The kids get work experience and real world coding knowledge, the mentoring managers get code developed for free (lol - and $500 for incidental expenses) and everyone benefits.

In case you are an applicable student (and it's not just US students - over 29 countries participated last year), then the FAQ is here http://studentfaq.html and there are a list of suggested projects here http://summerofcode.html

One of my favourite open source projects MythTV is participating and have a number of suggested ideas that they are looking for development on http://mythtv/SoC2006

Also in case you are wondering, here are some of the results from last years SOC 2005
http://soc-results.html
It's pretty much what you expect, some fail miserably, some results are average but more often than not some work out great and provide new thinking and ideas for future development.


Dean
Posted by Dean Collins at 6:47 AM 1 comments