Yet again auditors and lawyers booking fees without due diligence or care. Its available at Amazon on demand - The China Hustle - https://amzn.to/2EanFFV


This is the article where I found out about it with some more background - https://www.marketwatch.com/story/finance-documentary-the-china-hustle-revisits-chinese-reverse-mergers-and-activist-short-sellers-2018-03-30 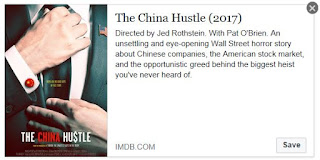 Was worth my $6.99 just to see General(ret) Wesley Clark squirm like a little girl when he realized his FUBAR decision to be interviewed in the first place.
Posted by Dean Collins at 7:22 PM 0 comments

Gay Bakers have more rights than Crypto and Guns

Email ThisBlogThis!Share to TwitterShare to FacebookShare to Pinterest
Reading this article today
- https://www.manatt.com/Insights/Newsletters/Advertising-Law/Cryptocurrency-Pays-Price-for-Alleged-Harm-With-Ad

I’m kind of curious what peoples thoughts are around these issues?

How come gay bakers are a constitutionally protected species according to SCOTUS ….but crypto startups and gun reviewers can have their rights trampled on like the unwashed floor mats at an all you can eat buffet.

But at the same time I cant help but wonder….shouldn’t all “currently fully legal” topics be freely shown and discussed?

So if YouTube bans a baking video channel that only reviews gay wedding cakes…..its a national emergency, but if YouTube bans some rednecks who like to talk about and shoot AR-15’s at plywood….this is ok. (InRange isn’t a small content provider either….they had 145,000 registered subscribers.

If Facebook is allowed to ban discussions about Crypto……we are all lead to believe this is fine.

But whats next? eg if they then use their powers to prevent us talking about startups looking to compete with Facebook…..then isn’t it the same?

What about governments around the world banning discussion on encryption and security methodologies “because it makes an educated society harder to monitor” Our free rights to new ideas are being infringed upon.

Last time I checked…..this isn’t what the internet is about. Thoughts?

Cheers,
Dean
P.S. I hope people get my humor about Gay Bakers, I fully support SCOTUS position. I just don’t understand why the EFF isn’t pursuing our other rights to discuss legal topics on these social media venues.
Posted by Dean Collins at 4:31 PM 0 comments

Email ThisBlogThis!Share to TwitterShare to FacebookShare to Pinterest
Its not everyone's taste.....but this Fridays music is avant-garde Godspeed You Black Emperor unfortunately the track below was never released commercially being recorded live by the BBC.

Sit back and listen and tell me this isn't some of the best live recordings you've ever heard and are able to pick out individual instruments in this 18 minute journey.

I've never been able to just listen to them in the background when their tracks come up on random play.....always find myself sitting back, listening, closing my eyes and just absorb.

Would love to hear them live in concert. One day, maybe.

Email ThisBlogThis!Share to TwitterShare to FacebookShare to Pinterest
Awesome :)

Just scored tickets to a very "only in New York" kind of event with Moby for Jodie and I tonight.

Email ThisBlogThis!Share to TwitterShare to FacebookShare to Pinterest
lol just noticed that https://www.facebook.com/KeatingBigPicture/?fref=nf  has banned my account from commenting because we disagree on some positions (mainly arround tax imputation).


Such a piss weak move @daemon.blake.37


PK would be laughing his ass off at how you cant handle anyone disagreeing with your positions and take the slime bucket method of witholding political discourse.

Email ThisBlogThis!Share to TwitterShare to FacebookShare to Pinterest
Had a cracked screen on my Samsung s7 edge. Replaced it at Newborn Wireless at 106 bowery and thought they did a great job......until 4 weeks later when I get a black spot on the top right.

Went back to see whats up.....told "you must have dropped again" nope not a mark on the new glass. Told....had to pay for new screen as only 1 week warranty.....

Told them thanks but no thanks and went to King Digital around the corner - he said its was a cheap aftermarket display they used instead of OEM.

Would I could give a negative or 0 star if I could. Wont be back.
Posted by Dean Collins at 4:29 PM 0 comments

Unthinkable: An Extraordinary Journey Through the World's Strangest Brains

Email ThisBlogThis!Share to TwitterShare to FacebookShare to Pinterest
I’ve just started reading the most incredible book on “brains” and research into how the brain acts/reacts in different people.


Its not a technical book however I’m finding the first few chapters ridiculously fascinating.


Unthinkable: An Extraordinary Journey Through the World's Strangest Brains
- http://amzn.to/2FtE9KQ 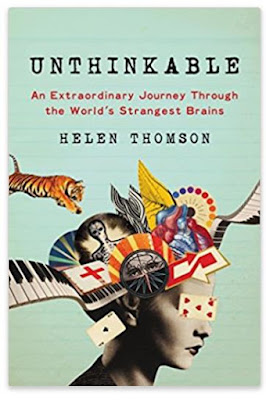 I came across it when reading this article (and might be enough info for most people eg to work out not your cup of tea) - https://www.theguardian.com/society/2018/feb/10/my-world-would-flip-lost-sharon-wonder-woman?CMP=fb_gu
Posted by Dean Collins at 12:12 PM 0 comments

Living longer....only if you've got the cash

Email ThisBlogThis!Share to TwitterShare to FacebookShare to Pinterest
If you think people hate 1%ers now....wait until they realize that rich people are able to live twice as long.... 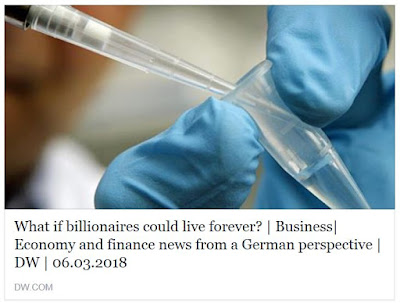