Anyone in NYC with an interest in much faster wireless internet….
Sign up here – https://starry.com/internet#email-modal

While Aereo founder Chaitanya Kanojia failed to disrupt television, today he unveiled a new wireless broadband carrier he hopes will disrupt the cellular industry. At a New York launch event today Kanojia unveiled Starry, a new wireless ISP that promises to use millimeter wave technology to deliver gigabit wireless speeds to your home. The technology will lean heavily on mesh networked city nodes utilizing 30GHz+ spectrum. Users will receive both a "Starry Point" antenna that sits outside of your window to connect to the city node, as well as a customized $350 router the company is calling a "Starry Station." The station comes with a touch-screen LED display that will offer an integrated speed test, a map of participating city nodes, and how many household devices are connected. Kanojia isn't yet revealing pricing, but claims he'll offer pricing that's "orders of magnitude cheaper" than incumbent providers, with no usage caps. Yes, offering gigabit wireless at low prices with no caps does sound like wishful thinking. Konojia claims it's possible using "millimeter active phased array technology" and hundreds of scattered rooftop nodes throughout each city. "With Starry's technology, we can deploy and scale faster than traditional wired networks -- at a fraction of the cost," 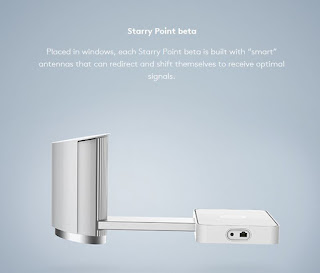