Email ThisBlogThis!Share to TwitterShare to FacebookShare to Pinterest
I've never understood why more people in the west arent making a bigger deal over the USA funding terrorism and invading Syria.

The irony of these claims against Russia by the State Department is insane and the fact that the Obama administration doesnt understand it........proves the point we are living in a parallel universe.

".........recommendation for some State Dept. representatives to check their logic and knowledge of fundamental documents of international law."
He said the U.N. resolution only covered the use of warplanes "inside Iran."
"Moreover, we again advise the State Dept. representatives to take a pencil to the map and discover for themselves that Syria is an independent sovereign state."
Konashenkov also pointed out that the U.S. was using a Turkish air base to support its own airstrikes in Syria and Iraq." 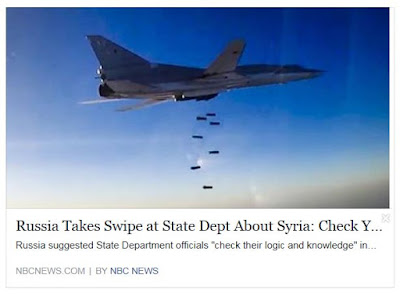