Email ThisBlogThis!Share to TwitterShare to FacebookShare to Pinterest
Destroying an 11-Apartment Structure to Build a MansionBy GINIA BELLAFANTE NOV. 4, 2016

For the past two years or so, my daily comings and goings have taken me past a building on my Brooklyn Heights block ripped down to the studs by a developer with the ambition of returning it to the market as a five-story brownstone for $18 million. 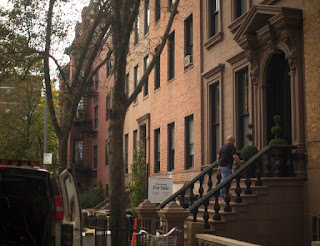 Let me ask you a question Ginia.....the developer(/prospective owner) of this property created jobs for all of the workers for the last 2 years and in the process created over $10m of revenue for the local economy.

How many jobs did you create over the last 2 years?

How much did you personally pay in taxes over the last 2 years.

I have no relation to this property (but live in the area a few blocks over and have walked past this building since it got announced) and will never be able to afford a home like it however my response is.....hey if its your money....go for it.

Who says millionaires should be forced to live in Scarsdale?
Posted by Dean Collins at 4:09 PM