Email ThisBlogThis!Share to TwitterShare to FacebookShare to Pinterest
Ugh just saw on NY1 this morning that they are talking about bringing "dockless bikes" to NYC in order to compete against CitiBike.

As much as I don't like some of the locations that CitiBike chose for their docks its been great for the city and one of the reasons it works is that everyone uses the same platform, If you have competing platforms......then you are duplicating the resources so less efficient.

My other real issue with dockless bikes is because they can be "locked by themselves" you can basically leave them anywhere.....so people end up leaving them..."anywhere" as once you've locked it up and walked away from it then its not your problem (similar issue to Car2Go cars that don't get parked in parking stations and instead are parked anywhere often causing issues with alternate side parking days here in Brooklyn heights).

lol don't think this is a problem.....check out whats happened in Beijing where there are a number of these companies competing - http://www.scmp.com/news/china/society/article/2062595/more-500-rented-bikes-many-vandalised-left-dumped-piles-near 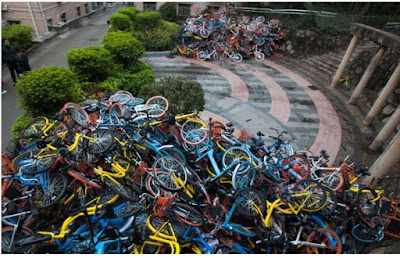