A Man For All Seasons

Email ThisBlogThis!Share to TwitterShare to FacebookShare to Pinterest
Its rather ironic that we went to see "A Man For All Seasons" the same day that the Michael Flynn guilty plea was entered......

The play is primarily about the split if the Church Of England from the Vatican (so that Henry VIII could get a divorce and marry again). But what I think its really about is really about is leaders surrounding themselves with fools and yes men and the execution of Sir Thomas More a man who stood up for his principles in the face of certain death. 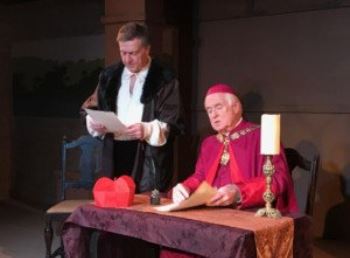 
ROPER So now you'd give the Devil benefit of law!
MORE Yes. What would you do? Cut a great road through the law to get after the Devil?
ROPER I'd cut down every law in England to do that!
MORE  Oh? (Advances on ROPER voice roused and excited) And when the last law was down, and the Devil turned round on you-where would you hide, Roper, the laws all being flat? (He leaves him) This country's planted thick with laws from coast to coast-man's laws, not God's-and if you cut them down-and you're just the man to do it-d'you really think you could stand upright in the winds that would blow then? (Quietly) Yes, I'd give the Devil benefit of law, for my own safety's sake.
Posted by Dean Collins at 10:28 AM