Email ThisBlogThis!Share to TwitterShare to FacebookShare to Pinterest
Police brutality really seems to be sort of "baked in' to society here.

Sadly I dont know how to fix it or whats going to be required to fix it. Maybe more spending on education and less spending on global military machine? IDK?

I do want to remind you of this though eg so you arent disillusioned about the future... Yes the USA has problems.....and yes it often disappoints, but its the fact that we still feel this disappointment is whats so great about America...eg we are always expecting more and hope for the very best, even when sometimes it falls short.
:( 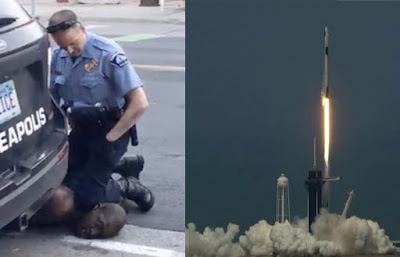 The fact that this is happening the same day that a private "AMERICAN" company is flying two people to the ISS is the dichotomy of the USA.

Its not a European company, and not a Chinese company, and certainly not an Australian company.......but an American company that 18 years ago was founded by a dude who sold out and made money from a "payments" company he flipped (....which lets face it was basically an idea available to anyone....he just happened to take the IP and blow it up into a monster deal which he has then blown up into 3 other monster deals one of which failed) and whilst i think Elon is a govt funding sucking whore a lot of the time........he did it in America, and thats pretty awesome.
Posted by Dean Collins at 1:34 PM