Email ThisBlogThis!Share to TwitterShare to FacebookShare to Pinterest
In a very "only in New York" kind of moment I got to see Lisa Loeb perform on Saturday night at City Winery. 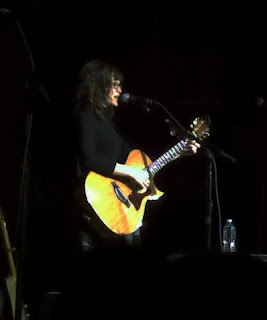 This was yet again a string of very NY style experiences, I'm sure she's toured in Australia before but when acts like this do they'll play much bigger rooms than City Winery where i was sitting less then 20 feet away.

So the good..... she's cute, she's funny, she's chatty (overly?) she sounds exactly like she does on her albums (eg she doesn't have a lot of "studio manipulation"), she's some one that is blessed with amazing talent and sounds chillingly perfect.

Basically she sucked on Saturday night and not only would I never pay to see her perform again-she really should offer a personal apology and a refund to every single one of the 400 paying fans that went to Saturday nights show.

It was such an amateur performance that was only made worse by moments of pure brilliance.

I mean if she just sounded bad, or played badly i would just walk away and say wow that was disappointing but it wasn’t that.

There were moments of surreal brilliance that i couldn’t believe wow how amazing is this.....unfortunately they were few and very very far between and most of the night she stumbled, fumbled, forgot words, couldn’t think of which track to play next - i mean she literally walked out on stage without a set list (let alone having practiced the set with her 3 guest artists who came on for various roles), she forgot the lines from the 3rd verse of a song (lol some of the fans in the crowd sang her through it). She asked the crowd for requests and when the crowd resoundingly asked for "Jake" she tried to play the first few chords and realized she didn’t know it ....this is her own song she realized she didn’t know.

It came out in her "chatty periods" that she had a baby and how long it had been since she toured, ok - some people make choices so i can understand that, but then the real issue came out, she talked about how she had been at an eyewear trade show all day and she had been working really really hard with this amazing company in San Diego blah blah blah - this was the frustrating part, when she was talking about her eyewear line she was all illuminated and excited but then when she was singing she was "going through the motions....barely" most of the time.


I think the real issue is Lisa is probably someone who has been gifted with amazing musical talents and in years gone past probably just winged it and her audience lapped it up – I hope someone taps her on the shoulder and says hey….follow what you’re passionate about, either become a full time eyewear designer and a mum or if you are going to take peoples hard earned money then practice and put on the show of your life – wasting your talents stumbling through set lists isn’t what you want to be remembered for; Compared to last time i was at City Winery for coincidentally Paula Cole's post baby comeback gig where you could tell she loved being on stage and relished the spotlight - the two gigs couldn’t be more juxtaposed.


Cheers,
Dean
Posted by Dean Collins at 2:03 AM