Email ThisBlogThis!Share to TwitterShare to FacebookShare to Pinterest
lol i dont have kids and i'm thinking should go out and get some kids just so can get away with buying this.
:) 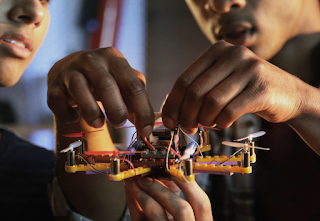 
A company called Flybrix is putting legos on the wing. The San Francisco startup today began selling build-a-drone kits for kids age 14 and up comprised of: LEGO bricks, boom arms and motors that don’t require soldering, and other off the shelf and Flybrix-designed parts.

Once assembled, Flybrix drones are lightweight and meant to be flown indoors. They can be operated with a Bluetooth flight control app for iOS or Android smartphones, or a manual flight controller purchased from the company. Flybrix drones are also, notably, “crash-friendly,” meaning they can be re-assembled time and again as kids experiment with their designs, and learn how to pilot them.