Email ThisBlogThis!Share to TwitterShare to FacebookShare to Pinterest
Australian election post mortem happening now....but most of it is just plain wrong. 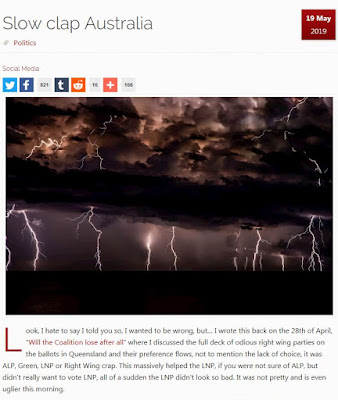 Any politician who says they lost the election because of the media or advertising deserves to lose.


You only have to look at AOC and Trump on how they get their message out to realise that people truly can be reached if you have something decent to say.


Personally i think neither party had anything innovative to offer this election and thats why people voted for the stability of the existing incumbents.....but thats just my opinion....and everyone has an asshole as well.


Basically Labor lost/ the LNP didnt win it, until Labor realises their mistake.....will happen again. As for blaming people rejecting labors plans for holding onto Dividend Imputations......uhm yep because paying tax WHICH WAS NEVER OWED IN THE FIRST place is dumb.


Its would be like saying.....so sad you are owed a tax refund this year....you should have planned better.....we'll hold on to it until next year and you can have it back then (unless of course.....the ATO owes you a tax refund that year as well.....thanks for being a good aussie).


This said.....democracy won eg everyone voted, we all got our Democracy Sausages, no one died at the end of a bullet/bomb, and thats a great thing and something to be thankful for