Nothing to worry about huh....

Email ThisBlogThis!Share to TwitterShare to FacebookShare to Pinterest
For all those people who said Assange had nothing to worry about and he should go to Sweden and face the made up rape charges......i give you todays NY Times.


Just as Wikileaks' editor in chief anticipated, the DoJ has revealed that a grand jury in Virginia has returned a new 18-count superseding indictment against Assange that includes violations of the Espionage Act. Significantly raising the punishment threshold (from a maximum of 5.5 years under the previous indictment to the prospect of a DEATH SENTENCE for violating the Espionage Act).

This country is messed up. If the government is killing innocent people and cant handle the sunlight.....is what your government doing in your name appropriate??? 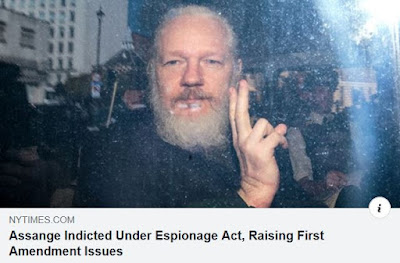