Email ThisBlogThis!Share to TwitterShare to FacebookShare to Pinterest
You know the old adage about don't poke a sleeping bear....people never say the reason you poked it in the first place was you didn't know it was a bear.
Well the question that's been on my mind lately is.... Is Microsoft A Lumbering Juggernaut Or A Leaping Jaguar?
Everyone has been saying oohh wow look at Google...how smart is Google...Google the stock market wunderkids....
Well before Larry and Sergey there was Bill.
And Bill didn't get to 90% domination without having a good idea once or twice. 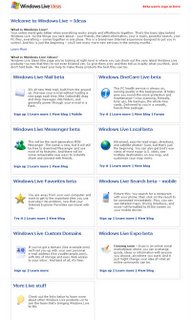 Want to see the scariest page on the Internet for Google You can click on the image to make it larger or just head over to http://ideas.live.com for yourself. WOW!!!
First of all does the 'look and feel' that page look like it's been designed by Google or what?
Secondly where the hell have all these new applications come from all of a sudden...whats with releasing a new application every week practically, that's not the lumbering juggernaut we know Microsoft to be. I could post a separate blog on almost each and every application but I'll run through them really briefly.
Windows Live Mail - basically just the new version of hotmail except that it now has drag and drop functionality...just like outlook, it has folders...just like outlook, it has more storage than any other web mail offering..... hmmm gmail - I thought that was your crown. The other thing is that you can only get access to it via invitations (al la gmail), I guess there's no Google patent on marketing your new product via exclusivity .... and yes there are some people already selling their invitations via ebay.
Windows Live Care - look out Mr Symantec & McAfee, having said that I think everyone has been asking why Microsoft didn't get into this space a long time ago, it makes sense.
Windows Live Messenger - some neat new tricks, basically revised voice capability (no more NAT issues), better video codecs. BTW Can anyone really believe that Ebay paid $2.6 billion dollars for Skype (yep that's billion with a 'B' )...It's a great technology and all but lets face it check out my friends www.freshtel.com.au they'll build you a white label voip service for a couple of hundred thousand outright....you can spend the other $2 billion dollars in marketing.
Windows Live Local - I haven't tried the mapping service yet, lets just say I'm sure people at Google are pouring all over it right now to see what they can do (BTW I love Google Earth here is the kmz link for my apartment in New York GoogleEarth.kmz).
Live.com - can you say.... one stop aggregator for both rss and html, who needs a Yahoo home page as your aggregator when you can configure your own - this throws a spanner in the whole home page aggregator concept.
Windows Live Saftey Center - not sure what the difference between this and Live Care is.
Windows Live favorites - love it love it. Basically it allows you to keep the same favorites at both home, work, laptop wherever you are. More importantly it doesn't offer it yet but will allow you to keep a collection of favorites, eg - you might set up a favorites list for the Sales Team, or for the Accounting Team. This favorites list can be managed and updated centrally but distributed remotely, trust me keep an eye on this, there will be more to come from this area of Microsoft.
Windows Live Search Mobile - pretty funky though I still prefer to use Opera Mobile browser with pre download encoding for most of my mobile browsing.
Windows Live Domain - Hotmail but for teams using your own domain....lol - where is all of this going? I'm sure there is a hosted voip service along similar lines in the wings like the 8x8 virtual office.
Windows Live Expo- I thought originally this was just a craigslist or ebay revenue spoiler until I dug a little deeper and looked at some of the cooler less obvious functionality. How about the ability to invite people into your expo, in other words you could have a group of 1000 Imogen Cunningham photography fans but only allow online bidding between recognized members of this group, this puts online community groups like Frappr onto a whole new level.
More Live Stuff - where the freak is this going to end? Who knows but that's what happens when you poke a bear. For the consumer it can only be a good thing.
I've integrated 4 of these into my daily life and I'll probably play with another 1 or 2 but to be honest that's not the point. The point is point is that now would be a really good time to sell your Google stocks,
Microsoft has shown google don't have a lock on new ideas and certainly shown they remain a very viable competitor. It must be an exciting time to be working at Microsoft, I'm sure the developers are falling over themselves to get their ideas implemented while the going is good. Leaping Jaguar....you bet.
Cheers,
Dean
p.s. lol - I swear I didn't know this when I was bloging about distributed favorites this morning but del.icio.us has just been bought by Yahoo for $US30M Not bad for a 31 year old guy who worked for Morgan Stanley during the day and was coding at night until fairly recently. More details here smh article
Posted by Dean Collins at 7:57 AM