Email ThisBlogThis!Share to TwitterShare to FacebookShare to Pinterest
Well as a lot of you already know I headed home to Australia for my first trip back since moving to NY over two years ago. Although I was heading back to be the Best Man at my buddy Shameek's wedding it turned into a bit of a work trip as I hadn't caught up in person with a lot of my clients in some time. (how's this for multicultural - the groom is an Australian Fijian-Indian who has been working in Germany for the past 3 years, Marrying an Australian born Italian who is hoping to move to the USA for their next overseas posting).

Firstly - fantastic trip - had a blast. Catching up with friends in person beats skype calls any day.

Sitting on Bronte Beach eating Char-Grilled Lamb Salad drinking the best latte I have tasted in 2 years just cant be beat (and all for $A12).

The reason for keeping my trip quiet and off my blog before arriving is that I was arriving to surprise one of my best friends Tabitha to take her out to lunch on the day of her birthday (little did I know she was going to surprise me by announcing she was pregnant to her boyfriend Damien and that they had both only found out the week before - lol, the look of terror in her eyes was worth the trip alone). 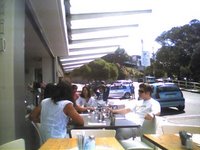 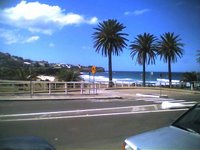 The lifestyle in Sydney just cant be beat. To put it into a perspective (unconsciously so) I'll tell you a story.

I arrived at 10.30pm on Monday night, walked out the airport terminal doors and breathed in the sweetest, warmest smelling air I had smelt and thought wow it's so polluted in New York.
It wasn't until the next morning I realised that the air was probably full of industrial pollution from St Peters and the jet fuel of the airport....and yet it still smelt sweeter.

There were lots of other personal revelations to the trip;

Such as running most mornings on the golf course near my old (and still unoccupied - thanks dad) apartment and feeling fit and fantastic (probably just the adrenaline the body hasn't felt in a while) and realising it's so much warmer than in NY at this time of the morning.

Being out with 18 of our friends on the bucks night and realising only 1 of us guys isn't yet married (and he's moving to Singapore in a few months so hurry while you can girls).

Wondering why the immigrants of the 50's-60's brought such fantastic food and coffee to Australia and yet the USA the largest recipient of the European wave eats crappy food most of the time and doesn't understand why the rest of us laugh.

Thinking about how although it seems like nothing has happened while I was away it's the little things in people lives that are important, things that just dont get covered in emails or in monthly phone calls.

Firstly lets get this out of the way. What i found out most of all is that while I love Australia and there is no doubt in my mind that Sydney is one of the best cities in the world (leaving NY way behind) that I'm in no rush to go back.

It may just be that I still feel there is so much to achieve here in the USA (it may also be that Jodie and I have already decided we are probably going to move to Europe or possibly China/Japan after NY) that there was that warm feeling of knowing it would all still be there in a few years from now.

Now secondly lets get the other 'thing' out of the way. Australian business kicks US butt.

I felt this when I first came to NY that it appeared to a number of expat Australians that businesses in the USA have no idea about customer service, and that Australians are one of the most innovative cultures in the world.

I think what this comes down to is that when you 'win' a customer in Australia you hang on to them bending over backwards to make sure they are happy. In the USA if you lose a customer, no big deal you have 260 million other customers. It's almost like the scarcity of business has made us overtake the Americans at their own game of customer service (this statement was backed up when I dropped in to LA on the way back to stay with an American friend who has travelled backwards and forwards to Australia for extended periods of time and has never forgotten the statement she made to me about my local greek drycleaner in Rockdale and the lack of jelly donuts like back home - Hi Nikki)

Yes you can poo-pah it to our colonial history and that we have to be self reliant on string and bailing wire etc but it's true.

What I saw in Australia was some of the most innovate adopters of the very best the world has to offer.

What I also saw was one of the most colloquial markets - with salespeople selling to the same people they were 5 years ago. Where a small number control a lot of the opportunities and some of them aren't really all that interested in changing the status quo.

Would this be changed by increasing Australia's population twenty fold, possibly, would you want to? Well that's still a coin toss and I dont think I'm experienced enough to call it at the moment.

All I know is that I'm very very lucky to have grown up in a country like Australia and proud to call it my home. 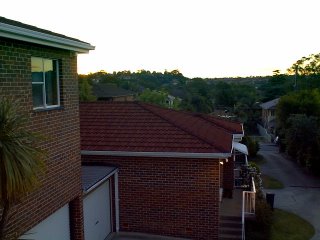