Do you Mogi Mogi?

Email ThisBlogThis!Share to TwitterShare to FacebookShare to Pinterest
www.mogimogi.com

Mogi Mogi is a very interesting real world gaming concept that has been launched in Tokyo.

It's an online game that is played on both a pc but predominately it is played on your mobile phone. What is unique however is that it uses your phones GPS (gps is physical geo-location feature not gprs which is the mobile data service - not a lot of western phones haves GPS built in).

With this GPS information, the game knows where in Tokyo you physically are, the location of you and your cellphone is then overlayed with the fantasy land of Mogi Mogi. 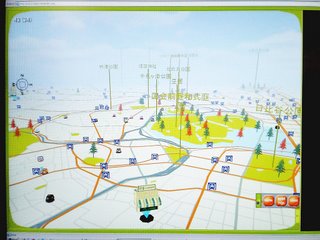 Real world elements may or may not be combined with the gameplay itself, such as the park highlighted above is an actual park in Tokyo.

You may meet up to swap "trinkets" eg. a spell may be swapped for a clue to another level, or similar. But there is also a thriving social community evolving with chat, character or avatar development and physical interaction.

What is neat is that the gameplay is continuous 24x7 for example some characters may only appear at certain times of the day, if you are not at the park at that time you don't get the opportunity to collect those points.

The developer www.NewtGames.com hasn't specified how extensive they intend to make this game, or if they intend to interconnect other locations around the world (such as "Spore"), however the ability to implement content, social networking and physical world tie-ins are obvious.

Some of the user comments I've been able to find on the web are "eye opening" to say the least such as;

All the trips I make in the city are now randomized, as I will often divert a few hundred meters to go and collect an object around me. I get a chance to discover parts of the city that I ignored, a motivation to check out that parallel street I never took.

It has a community dimension to it, I chat with other players, I also know how far I am from them and finding out some are less than a few hundred meters to me is really exciting. I had to race to pick up a flag that had been put on the map at equal distance between me and another player to encourage us to meet.

A blog detailing the first US mobile location game from Boost Mobile (hmmm I don't think Boost get it).
http://mobilegames.blogs.com/mobile_games_blog/games_location_based/index.html


Either way, this concept is definitely one to watch.

Although Newt Games have gone heavy on the technology, as long as carriers allow mobile triangulation information or western handsets start getting GPS functionality, this physical/fantasy world interaction can be implemented into concepts as simple as Urban Dare (read my last post) or even the one off Smart Improv (search my blog for the article).

As I'm pretty much pure geek, for a wider sample I'd love to hear your own thoughts .


Cheers,
Dean
Posted by Dean Collins at 7:30 AM