Email ThisBlogThis!Share to TwitterShare to FacebookShare to Pinterest
Went to see Hoodoo Gurus downtown at BB Kings last night, what can I say but you don't get to last from 1982 to 2007 without having major skills. 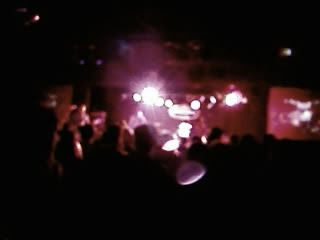 A couple of other interesting things came about last night;

1/ What is it about the brain that makes us able to sing a chorus word for word when we haven't listened to a song for 10 or more years?
Seriously on this point, how can we harness un-recovered memory in way more readily accessible, it's obviously still there and with the slightest stimuli we are able to initiate massive amounts of recollection.

2/ What is it about Aussies that make us unique looking?
I mean last nights crowd was at least 60% Australian and just by looking at people's faces you could tell who were the Australians versus the Americans. Some of us may have been here longer than others and even though we come from unique backgrounds, anglo, european, asian etc there is something quite distinct about an Australian.
It might be the way we act or carry ourselves versus anything else and even though if I passed some of these people in the street I wouldn't necessarily have distinguished them but there was a real common thread with 60% :) of the people people at the concert last night.

Makes me want to start up http://www.aussienymeetup.net/ again, I still own the domain and I have a spare server here, I might fire it up again in the next few weeks.


Cheers,
Dean
Posted by Dean Collins at 9:44 AM