Email ThisBlogThis!Share to TwitterShare to FacebookShare to Pinterest
This has to be one of the neatest B2B targeted marketing campaigns I've seen for a while, would only work with certain products and in certain situations but perfect for 'influencing' a journalist if you ask me.

Wheeled into our office this afternoon by a special ops team of beer couriers was this £146 pile of Fosters on behalf of one Microsoft Corporation.

Was it because of our gushing GDC coverage?

No, apparently MS has a more specific reason for its generous gift."What would you purchase for £146...?

(The price difference between an Xbox 360 and a PlayStaion 3)", asks the included Xbox 360-headed notice. "Well, for a start we thought you might like £146 worth of beer to kick start your weekend early." 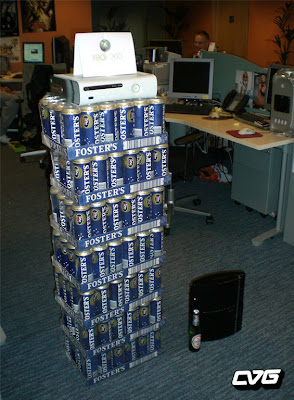 The fact they delivered it as Fosters is appalling but what can I say, they're British and have no idea about beer.

Anyway, great campaign - going to have to remember that one for my own use some time (if anyone finds out who the creative agency was that implemented it let me know).