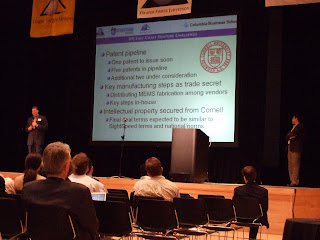 I'm sitting in as a guest of the DFJ East Coast Venture Capital Competition today (nice prize - proves things in the USA are really bigger - first place is $250k in seed money.....not bad for a 15 minute pitch).

What I wanted to post about is Mezmeriz which is a new projection display technology. Great story basically one of the scientist geeks working on carbon fibre realised that one of the 'functions' of a product he was working with was able to massive twist from end to end similar to silicon but with far greater scan rates and angles.

Whether it's real or not is to be seen but they have a lab presentation of a 60" display from only a 5" throw.

This means you could have a full 60" rear projection display with only 5" deep and because no need for lenses like the current heavier units.

Now here comes the cool bit....with only minimal power draw you know that video scene you saw where the image from a mobile phone was projected on the wall....these guys have it.

Like I said currently only a working lab proof of concept but I wouldn't be surprised if they are on an ipod or iphone near you within the next 3 years. Check them out www.Mezmeriz.com


Cheers,
Dean
P.S. it was supposed to be a winner take all competition but in the end they couldn’t decide so the VC’s kicked in a separate 100k prize for second place. The 250k prize winner SteriCoat is a coating application on medical devices (catheters etc ) to prevent infection that didn’t use drug release like the current ones but was a mechanical property of the coating.
Posted by Dean Collins at 2:35 PM