Off to London for a week

Email ThisBlogThis!Share to TwitterShare to FacebookShare to Pinterest
I'm probably not going to have time to blog for the rest of the week as I'm in London until next Monday.

First note - it's weird how much some parts of London are like Australia. On the limo ride in I could have been in Eastwood or North Ryde for most of the trip.

Second note - it's weird how many UK companies have similar branding to Australian companies, the colour selection for Sainsbury's and Coles is almost identical.

Third note - how the hell does a bug end up dead between the vacuum sealed plane windows of a 737? 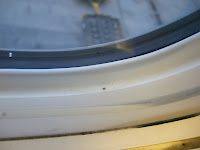 BTW Is it just more or do more people feel it's uneasonable that in this day and age that planes should be quieter inside than they are, i mean it's ridiculous the noise level you have to put up with for hours on end - that and when are we going to have power outlets in all seats? laptop batteries only last so long which i wouldn't mind but with only 8 channels on the tv's and nothing worth watching it was a pain when the divx movie on the laptop didn't make it to the end.

I wouldn't bitch so much but on comes the captain to say welcome aboard AA 737 one of the most newest planes in the fleet....really i wouldn't have noticed with your crappy paint job and your lousy food......oh and it's raining in London this morning :(


Cheers,
Dean
Posted by Dean Collins at 4:20 AM