Email ThisBlogThis!Share to TwitterShare to FacebookShare to Pinterest
I love it, i think it's a great advertisement.

I was stunned when i was in Paris with how many young people were smoking (20% of French 16 year olds smoke according to the article). 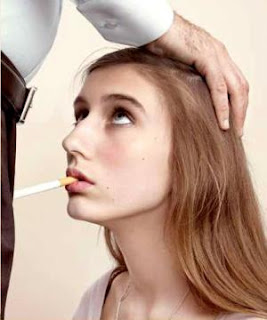 http://www.independent.co.uk/news/world/europe/french-in-uproar-over-oral-sex-antismoking-posters-1908559.html
French advertising companies are often criticised for using sexual images to sell everything from designer spectacles to sweetcorn. Now, for the first time, a controversy has erupted in France over the use of sexually suggestive posters as a deterrent.

The caption reads: "Smoking is to be a slave to tobacco."