How is it that now one else is complaining about this!!! 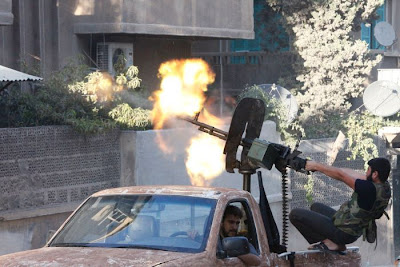 So this guy isnt a terrorist huh...?????
- http://www.abc.net.au/news/2012-09-29/mortars-rock-aleppo-as-foreign-help-steps-up/4287224
This is the person that Hillary Clinton just gave $45m in "Logistical Support" to and almost nobody on my facebook and Twitter list thinks that this is a problem?

There should be rioting in the streets over this issue that Hillary and Barack are taking us to war with Syria a sovereign state.

Can you imagine if Iran or China or Russia decided to fund a group of Americans $45m who were driving around the streets with weapons like this on the back of their SUV's.

Hey Barack Obama how about you wake the fuck up!!!!
Posted by Dean Collins at 11:03 AM