Email ThisBlogThis!Share to TwitterShare to FacebookShare to Pinterest
I purchased a Cyberpower PR2200LCDRTXL2U ups in late 2009 (receipt below), the first non-APC unit we’ve purchased.


On Thursday the 12th of September we were moving the server rack from one room to another. Probably as far as I know the first time the UPS has ever been powered down (but cant confirm that).


When the unit was installed in its new location we tried to power it up only to find no response with the switch (but yes as it’s a mechanical switch was working fine and depressed half way etc).


Please understand prior to moving it NO INDICATION OF ANY PROBLEMS AT ALL otherwise heck I would have never powered it down and just left it running while moving it to the new physical location. It is a UPS after all.


Three very disturbing facts have become apparent to me about the CyberPower company and their products after speaking with their tech support on Thursday afternoon.


1/ If the battery is “unsuitable” and past its ability to hold 100% charge the runs a “smart test” and unit wont power up-however gives no indication this is the issue, design flaw on two levels but their replacement price of about $150 for batteries is reasonable (well compared to APC anyway) but I find this a major design flaw that even though the unit may have never given a “replace battery” warning a company could be left without access to a UPS if the batteries were past date and then need to wait 1-2 days for a delivery.


However after testing with a multimeter this is not the issue here.


2/ That although Cyberpower has a 3 year warranty their answer to what do I do with this now that I’ve found out its not a battery problem is …..”junk it”.


Even though only 4 years old their response is we carry no service parts in the USA, we provide no repair capabilities in the USA, and if the unit is newer than 36 months eg "IN WARRANTY" we’ll swap it for anew one (one way shipping covered) BUT after that their only response is only to “junk it”.

HOWEVER THAT ISNT THE MOST DISTURBING PART


3/ After checking the batteries were fine, and the switch was working, I thought I’d look over the rest only to find it immediately obvious what the issue is. 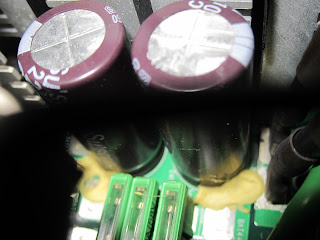 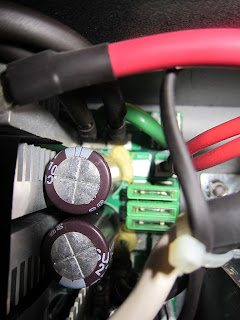 There are two capacitors located right next to the heat sink (a terrible design flaw to begin with) and these Su'scon 2200uF 63v capacitors had bulged and leaked.


So basically for the cost of 2 x 50c capacitors CyperPower is telling me to junk an $800 unit!!!


As discussed this could be a major sleeping issue. At no time was there an indication of any problems, the unit has been operating faithfully with no issues. The servers connected to this have never had any power issues. No indication at all of problems……JUST LIKE THE REST OF THE CYBERPOWER customers out there.


This model has been sold since 2008 I understand and is still the current model being sold. How many other Cyberpower PR2200LCDRTXL2U (or for that matter CyberPower PR3000LCDRTXL2U owners) have this sleeping issue waiting to bite them because


As for Cyberpowers customer support saying….junk it and 4 years is reasonable lifespan for an $800 item…..I find that unacceptable considering it can be repaired with 2 x 50c capacitors.


For CyberPower customer service operator “Cal” he refused to give me his surname….. to say this capacitor leaking issue isn’t a big deal because they’ve never heard of it (possibly lying) but the fact that 4 out of 5 UPS’s probably never get powered down so wont become an issue until a customer turns the unit off and then tries to turn it back on is what I have an issue with.

Like I said….i wonder how many other Cyberpower / PC Nation customers have “passed their warranty period” blissfully ignorant their capacitors have failed as well.

So if you own a Cyberpower PR2200LCDRTXL2U  (or CyberPower PR3000LCDRTXL2U as same model different capacity and possibly other models) ....you might want to turn it off at 35 months and check you don't have a warranty issue.