Email ThisBlogThis!Share to TwitterShare to FacebookShare to Pinterest
There was a StopWatching.us rally in Washington DC yesterday and Jodie and I bussed down.

Smaller than I would have hoped for, and sometimes I want to grab people by the shoulders and shake people saying "you get the government you deserve......."

Best quote I heard of the day......"who here thinks NSA surveillance is still about fighting terrorism".

Was also really surprised at what a powerhouse speaker a Dennis Kucinich was, I'll have to check out more of what he's got to say as most forthright politician I heard all day.

Was also interesting to see how Chinese CCTV was there covering an "anti-government protest about state surveillance", i'm wondering how that was presented "back home". Also saw Turkish/German and of course the Russian RT channel covering the protest. Strange bedfellows indeed. What a world we live in today.

Did the President notice.....nope, Are the NSA cowering....nope, did we achieve anything....nope BUT if you don't stand up to be counted.....then you don't get to complain after the fact. 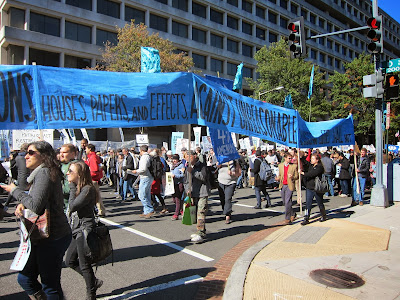