Email ThisBlogThis!Share to TwitterShare to FacebookShare to Pinterest
Roger seems to have got his nuts in a twist over this QR campaign. 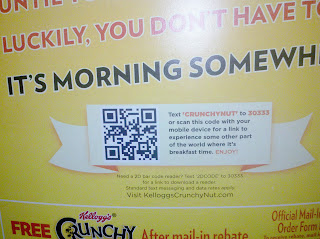 Running a campaign, which is titled "It's Morning Somewhere" and the idea behind the campaign is that anytime is like breakfast time - a great time to eat and enjoy Crunchy Nut cereal. To promote the campaign, Kellogg's has placed a QR Code on the back of Crunchy Nut cereal boxes. When the code is scanned, the customer is brought to a very simple mobile page, which is divided into three sections. The top section displays a product logo, the middle section is a video screen which displays the copy "Right Now: It's Morning in Magnolia, Washington" and the bottom section displays an image of a cereal bowl with the words "It's Morning Somewhere."

I actually thought it was kind of cute concept (apart from the fact they used URL REDIRECTION!!!! which is a major outsourcing failure decision but hey thats just me)

I posted a comment to Roger that he hasnt approved yet.

I actually thought the campaign was cute idea.
Had potential to go viral so surprised i'm reading about it here.
Augme needs to implement viral tools in their product portfolio (though mybe they pitched twitter/facebook integration but go shot down.

Cheers,
http://www.Cognation.net/QR
Posted by Dean Collins at 9:21 AM