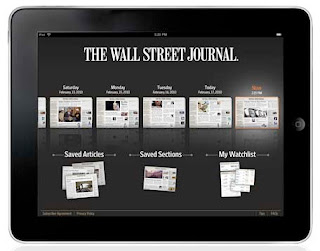 So we now have the official price for the WSJ iPad app subscription: $3.99 per week with a monthly credit card charge of $17.29
http://www.engadget.com/2010/04/02/wsj-ipad-subscription-officially-17-29-per-month-is-murdoch-in


I dont get why people think this is wrong, i think the ipad with it's additional functionality should always cost more than the print version.

You're trying to compare an apple with a rocket ship. Paper SHOULD be perceived as a "Tier 2" cheaper/inferior product.

I wont be buying one but thats because i dont own an ipod or buy mp3's either (i have a boatload of cd's though and buy at least one or two a week but then i rip my own mp3's and store on my own media server..... no one can pull my digital license and prevent me using content the way i want, but thats another story.