Email ThisBlogThis!Share to TwitterShare to FacebookShare to Pinterest
Wow - Oliver Stone is a genius. 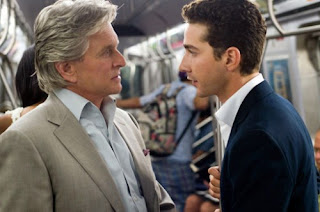 (btw spoilers below dont read until you see the movie).

It's the same as Wall Street but different. You end up loving Gordon Gekko all over again but for different reasons.

Michael Douglas is a perfect actor, you dont ever see him as an actor, but as the actual "Gordon Gekko" ingrained in your reptilian greedy mind. (btw amazing how much he looks like Kirk Douglas in some scenes now).

The Federal Reserve scenes are perfection, you almost feel like taking a bat to the next Goldman Sachs executive you see on the street (shortly followed by taking the same bat to the next federal politician for being spineless and mortgaging your future - love the NINJA acronym).

The cameo role with Bud Fox was superfluous and felt cheesy, btw did anyone notice they brought back the real estate agent out of formaldehyde? that was a nice touch (especially if you have ever dealt with any NY brokers).

The Met scenes were perfectly shot and felt like they could have been shot during the fall of Rome.

Would i recommend someone see it, 100% Yes (even if they didn't see the first one - btw I was surprised how empty it was last night for only the 2nd night?)

At the end of the day this movie is an instant classic, they should have ended the movie differently without the cheesy happy feel good scene but apart from that this movie was practically flawless.