The state of 2D barcodes

Email ThisBlogThis!Share to TwitterShare to FacebookShare to Pinterest
So if some of you read my twitter feed @DeanCollins you'll know that last night i was at a pretty big 2D barcode event http://mobilemonday-ny-july-25-2011.eventbrite.com/

It was pretty well attended with about 150 of exactly the right people- agencies, customers, vendors, journalists, even a handset manufacturer.

Unfortunately it quickly resolved into a mess..... 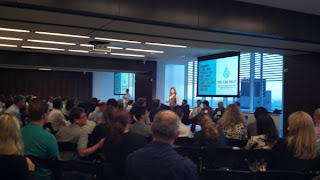 ...and i'm not sure if i helped or hindered the destruction by jumping up 10 minutes into the panel to throw out the first audience comment about how Dan Frommer - "Death-to-the-qr-code" - on the panel was full of shit for calling out QR codes being useless as it didn't work underground in subways and why wasn't he writing articles about the death of web sites because URL's dont work underground in subways. (you have to respect the guy turned up to be on the panel though....nice guy too, we chatted afterwards about his new venture SplatF).

What didn't work was the moderators insistence that they base the panel on her article about the 14 best QR practises to follow-  http://searchenginewatch.com/article/2066777/Top-14-Things-Marketers-Need-to-Know-About-QR-Codes - whilst Angie's article is great....it was way to basic a discussion to have with such an experienced audience....and with such high level panel members where we could have had much more advanced topics about why/were and how the industry needs to move forward.

i honestly dont know how to write this blog post; it could be summarised in a couple of different ways-

"the discussion was that different people had different points of view because of their real world experience working with end users and customers".

"the discussion was an example of why the end customer is confused ....because there are so many points of view".

I mean we had the brand manager from MsTag saying it was a good thing that there was only 1 tag reader available and that Ms managed end to end experiences. (he based his comment on having 200+ QR readers available in the iPhone app store was a bad thing)

btw personally I really think Microsoft missed a golden opportunity to become the "google analytics" of QR codes and could have captured a significant portion of the market if they allowed other readers to read their qr codes and other publishers to create their short urls. Microsofts MsTags analytics isnt bad but a closed system is doomed for failure.

We had Dan saying QR codes and MsTags were going to die and that NFC's were the way of the future (though Augme.com pointed out that there was no way Kellogg's could afford to attach NFC's to every cereal box for their recent QR campaign - http://www.thehotiron.com/index.php/site/comments/kelloggs_new_crunchy_nut_cereal_uses_qr_code_to_reinforce_marketing/ )

Of course there were a few "Image Recognition" is the future supporters in the crowd (you already know that image recognition sucks compared to door knobs) and once every image in the world is classified then i'll be a strong supporter...until then it is always going to be a fail.

It was dissapointing that the best use case examples of QR codes put forward by the panel were a little weak and not doing anything innovative (though I think innovation in QR codes is overrated and we should just be building more rather than needing to be different).


The discussion fell apart with people saying the reason 2d codes aren't taking off is there are too many choices, too little choices, too much control, too little control, we need a centralised ecosystem, that the current open system of QR codes is best...... i think you get the point.

What did i learn......  That Microsoft have plans to incorporate MsTags into other parts of the business, although the product manager wouldn't say (i think more because it hasn't been decided rather than he didnt want to tip off the competition) there were allusions to end users would be able to create codes across more Microsoft interfaces.....
- eg imagine writing a word doc and being able to save it on your cloud drive to pass on to other people as a MsTag (eg like passing on a tinyurl) which whilst i like the idea.... its dumb that they are doing this as a "sole provider" and there is nothing that they are offering here that couldn't have been done as a QR code vendor....the brand managers response to that was "that decision has been made and the boat sailed"....yeh maybe but a ticket on the Titanic still sucked.

I also learnt that nothing has really changed since i stopped actively working in the QR space 2 years ago.

At the end of the day my answer to everyone who asks me after reading www.Cognation.net/QR is the same, be aware of the issues of direct versus indirect codes, be aware of the differences between open QR codes and proprietary MsTags, be aware of the issues surrounding image recognition so when the CEO comes into your office next week after reading a Techcrunch article about how its the next big thing you can calmly respond, be aware of where NFC is going and when it's appropriate to use...... but at the end of the day just get out there and use QR codes for various projects and just build great campaigns that add value.