Email ThisBlogThis!Share to TwitterShare to FacebookShare to Pinterest
Tired of bogus software patents? So are we! To combat these annoying and often dangerous legal weapons, EFF has launched the Patent Busting Project to take down some of worst offenders.
http://www.eff.org/patent/index.php

I. The Problem
Every year numerous illegitimate patent applications make their way through the United States patent examination process without adequate review. The problem is particularly acute in the software and Internet fields where the history of prior inventions (often called Â“prior artÂ”) is widely distributed and poorly documented. As a result, we have seen patents asserted on such simple technologies as:

II. The Harm
The harm these patents cause the public is profound.
Unlike most technologies, software and the Internet have attracted a vast number of small business, non-profit, and individual users each of whom has adopted and built upon these resources as part of their daily interaction with computers and the online world. From open source programming to online journaling to political campaigning, the average citizen is using new technology online and on her desktop as often as any traditional company. 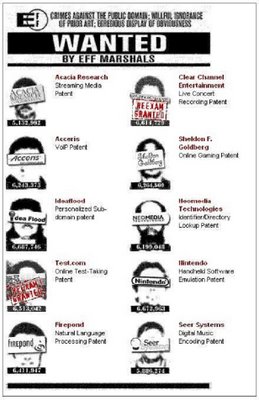