Email ThisBlogThis!Share to TwitterShare to FacebookShare to Pinterest
I haven't seen any of these in person but I wanted to post about it because this is a perfect example of weak spot marketing (the best was Universals attack on Disney's stranglehold of the theme park holiday - read about it in Michael Eisners autobiography).

Marketing so often comes down to speeds and feeds and whilst there is a place for it, real marketing is striking a sweet spot with your target audience that is emotive and cannot be refuted by your competitor in any way without changing their base position.

Apple is in such a strong position with their iPod that there is no way they can reposition themselves to compete against this type of guerilla marketing.

I'd like to know who came up with this for SanDisk and buy them a beer.

SanDisk goes after the iPod iPuppets 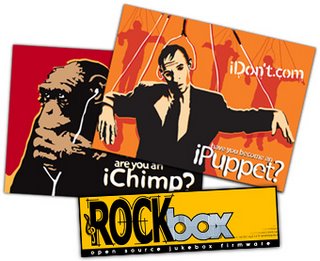 If you've been on public transport this past week, you'll have noticed what looks like a counter-culture uprising against the iPod. Posters and stickers have appeared showing chimps, donkeys and sheep listening to music on iPods. Underneath the images there are taglines like 'are you an iChimp?' and, 'Don't follow the iPack'. One advert shows a man strung up by iPod headphones, like Pinocchio, beneath him the tagline reads, 'have you become an iPuppet?'

The adverts have a pseudo-street graffiti style. The stencilled graphics and ancient typewriter font give the impression of an underground movement against cultural homogenisation. But visit the idont.com Web site espoused by the ads and you'll uncover a different story. Far from a triumph of AdBusters or a campaign financed by Naomi Klein converts, these posters are actually SanDisk's new marketing campaign.

SanDisk is Apple's archrival. Since May 2006 SanDisk has been the world's second most popular MP3 player manufacturer, behind Apple. Its e200 player looks very much like the nano, but unlike many other iPod clones it sells well.

This anti-iPod advertising campaign represents a spark of genuine retaliation against Apple. It's a relief to see a rival bring out its guns, in what had become a landscape devoid of any major competition for the iPod.

SanDisk is the first company to market its player as an ideological rather than technological alternative to the iPod. To do so is to fight Apple on their own terms. The SanDisk e200 is not being touted as more advanced than the iPod, it doesn't claim to have longer battery life or a larger capacity. Instead the e200 is being marketed simply as what it is not. It's not an iPod.

The SanDisk assault doesn't end there. SanDisk is reported to have quietly approached the open source developers behind Rockbox, a free operating system for MP3 players. The company is said to be interested in porting the Rockbox software to its e200 player. Rockbox was first conceived as an alternative to the flawed software provided with an Archos MP3 player, but it has evolved into a multi-platform alternative interface supported by many different players. The latest version supports everything from an iPod to an iRiver MP3 player.

Not only would a Rockbox port earn SanDisk credibility with grassroot geeks, but the software offers a number of appealing features, including support for nearly every codec going.

It looks like Apple may finally have a fight on its hands. iPod critics are quick to bemoan Apple's reliance on marketing over the player's technical advantages, now SanDisk will be putting this to the test. If Apple really won the west by manipulating the iPod to the point where it became a lifestyle necessity for any self-respecting music lover, can SanDisk unseat it by turning the iPod's ubiquity against it?

In many ways, SanDisk's advertising campaign has the phony ring of Sony's heavily criticised faux-graffiti campaign for the PSP. Sony hired graffiti artists to paint what looked like street art on city walls, but the characters depicted suspiciously clasped PSPs. Critics on some forums said Sony was "shamelessly appropriating a culture". Effectively that is what SanDisk is doing here. The adverts may use the graphic vocabulary of anti-capitalist campaigns, but the object of the exercise is to sell SanDisk MP3 players. Still, competition is exactly what Apple needs right now, and this is an ingenious attack. Now get back to your iPods, chimps! -CS