Email ThisBlogThis!Share to TwitterShare to FacebookShare to Pinterest
(thanks to mediapost for sending me this).
Stanley launched a line of tools called FuBar. If you've seen "Saving Private Ryan," then you know what the acronym stands for. If you don't know what FUBAR stands for, then come out from under that rock you've been living under and Google it! The company launched a Web site where four construction workers use a FuBar tool to demolish almost anything that stands in their way, from a toilet bowl, sink, armoire and piano. Each worker wears a helmet cam, so if you want to get a closer look at the destruction, you can watch the mayhem via helmet cam. Be sure to click on the bunny icon to see what happens when FuBar and bunny meet (don't worry -- it is not an ending like "Fatal Attraction"). The site also houses a TV spot featuring construction men playing an adult version of hit the piñata. Mullen created the site and TV spot and mediaHUB handled the media buy. 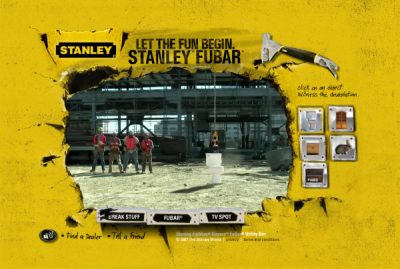 It's fantastic, it's art, it's so well thought out and created this is going to be huge. If you're a male and you are in the target audience of someone who knows what end of a hammer to hold you are going to love this.

Forward this post to all of your friends now they are going to love you for it. Judges we have a winner.