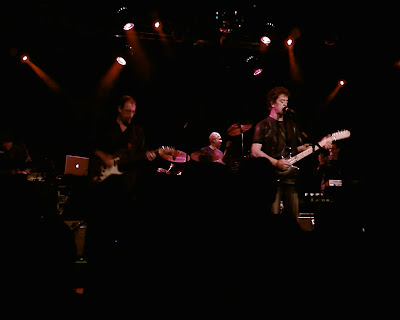 One of the cool things about living in New York is getting to see 'local' bands. You dont get any more local than Lou Reed.

Basically about 3 months ago I was buying some tickets to a tiny little band you would never have heard of and stumbled across that Lou Reed was playing in the same venue, apparently he played a gig in this same venue (The Highline Bar) last year as well (of course the gig was sold out a few days later after going on sale).

So on Monday night we got to rock up and standing room only but cool as only about 500 people. Only problem was we were about 5 rows from the front and was LOUD!! (to the point where it was too loud for some songs).

The most amazing song that he sung was called "Power of the Heart" which was a song I'd never heard of before, about asking his wife to marry him, amazing 'restraint' in the volume and pacing of the song, if I can find it released anywhere might even replace Perfect Day as my favourite song of his.

I'd love to see him do more of a blues or acoustic only set in a lounge bar setup.


Cheers,
Dean
Ps. came across some other links if you are interested;
http://blogs.villagevoice.com/music/archives/2008/05/live_lou_reed_a.php
http://highlineballroom.blogspot.com/2008/05/lou-reed-highlines-1-year-anniversary.html
http://laurieanderson.com/gallery/#video

Also this isn't the exact concert we went to but NPR recorded another one of his concerts that is available to listen to here - it does have Power Of The Heart about 1/2 of the way through the gig. http://www.npr.org/;m=90219917
Posted by Dean Collins at 9:41 PM