Email ThisBlogThis!Share to TwitterShare to FacebookShare to Pinterest
So in the interest of true startup learning and sharing I thought i'd post some results from the first 2 weeks of the Adwords campaign we kicked off for http://www.LiveBaseballChat.com/

I've got to start by saying i'm really surprised how little of our budget got spent each day. It's like i'm trying to give google money..... and they cant find space/time to take it from me.

So as you can see in this first chart below, We ran a campaign for 14 days with a limit of $10 per day (though i preloaded the account with $500 so would have been happy to increase this limit if it looked like we were getting anywhere close to $10 a day but we never even came close).

A couple of interesting things to note;
- very little traffic from google.com search? interested in your thoughts if you know, is it because i'm not bidding enough? not enough people searching at google with the appropriate keywords etc?
- notice 13% click through for 'search' traffic versus less than 1% for 'banner ad placements on content' 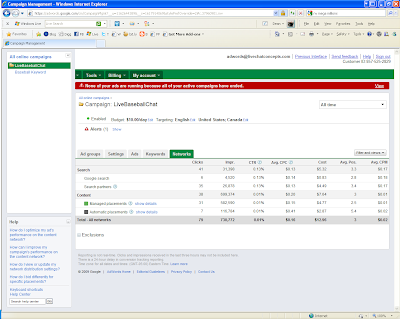 So the first thing I noticed in the next "Clicks" chart is it shows 33 clicks on the first day (even though there were only 30,148 impressions see chart below). Who were all these 33 clicks? I know two of them were me :) but it's not like site registrations went up much on that day, google staff maybe?

The other interesting point is Search got me more clicks BUT cost me less and although i had a rating of 3.3 (which i'm assuming means got our add on the first page anytime search for my keywords came up) but the overall number of impressions are less than 5%. 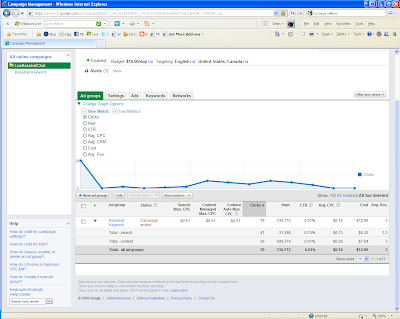 The next chart shows that in total we had 730,772 impressions. Which is pretty reasonable for $12.96 (eg we are charging about $1 per thousand banner impressions on our site - so to advertise that many times on our site would have cost over $730).

The question i do have however is how memorable our web ad actually is. The URL http://www.LiveBaseballChat.com/ appears twice in the ad quite prominently so I'm curious how many people might notice the ad, and although they don't click through at that time - remember the URL http://www.LiveBaseballChat.com/ and then check out the site at a later time?

The other question is why the spike of 169,721 ads on the 30th of May, a weekend Saturday so lots of baseball traffic i guess, but nor corresponding spike on the following Saturday? in fact we only got 2 clicks that day with all that traffic but the following Saturday we got 91,140 impressions with 9 clicks? 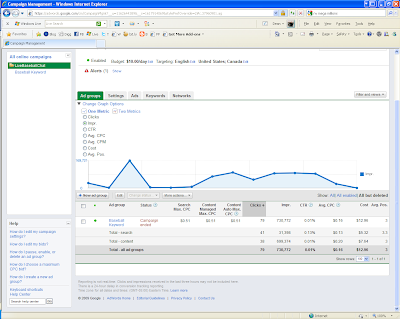 The Average Cost Per Click chart shows fairly large variations in the cost for each successful click through, eg clicks cost all the way from 7c to 33c.

And it doesn't seem tied to a week day or particular cycle so i'll see how this statistic evolves over time. 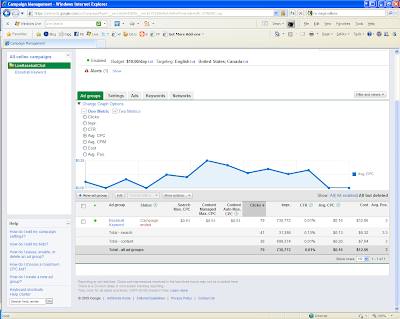 Obviously this chart is jagged because on two days we had no click through traffic at all. 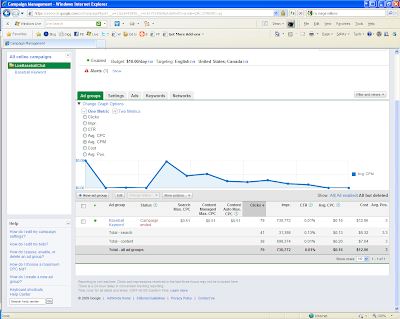 Finally I thought i would throw in the 3 different examples of the ad that we used for this campaign. Although the pretty much show the same content/intent there are slight changes.
The clicks are higher for the first 2 it is due to number of impressions more than a better success rate. 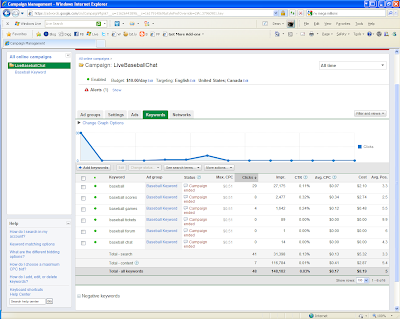 Do you think we need to change out this content? should we be throwing in a couple of 'oddball' eye catching content lines?

Is our money better spent on banner advertising?

Either way look forward to your feedback.