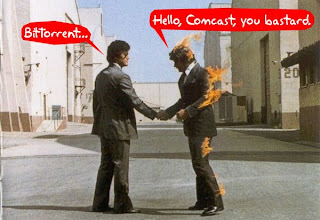 http://gizmodo.com/372833/comcast-pulls-an-about-face-teams-up-with-bittorrent-for-net-neutrality
http://www.engadget.com/2008/03/27/comcast-lays-off-bittorrent-will-continue-to-manage-internet-tr/
http://news.yahoo.com/s/ap/20080327/ap_on_hi_te/comcast_bittorrent
"PHILADELPHIA - Comcast Corp., an Internet service provider under investigation for hampering online file-sharing by its subscribers, announced Thursday an about-face in its stance and said it will treat all types of Internet traffic equally.

Since user reports of interference with file-sharing traffic were confirmed by an Associated Press investigation in October, Comcast has been vigorously defending its practices, most recently at a hearing of the Federal Communications Commission in February."
A bit concerning that further into the article they state this
"Comcast said that by the end of the year, it will move to a system that manages capacity without favoring one type of traffic over another."
Probably moving to a metered system with tiered limits on download volumes - which I'm totally cool with, user pays is fine BUT just let me choose what I want to download/upload.
This hasn't affected me personally as I'm on Time Warner, but I think Comcast has been seen as a test case and others may have followed, so this reversal can only be seen as a good thing.