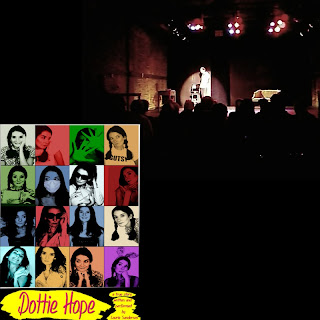 I just saw the most raw performance (and I mean raw in a good way) I've ever seen on stage.

A friend of ours here in New York, Laurie Sanderson has been talking to me for the last 2 years about a 90 minute monologue of her life that she performed a few years back and I've always been "sounds nice" etc.

For a short run she's performing this show again at a small theatre on the lower east side called La Mama I just went to see it tonight and it blew me away so I wanted to share with you in the hope that some of you reading this might get to see it during one of the next 3 shows next week.

The show is called "Dottie Hope" and the tickets are $20 at http://www.lamama.org/


So the official synopsis is below;
Dottie Hope is Laurie Sanderson's riveting true story of hope and survival in Hells Kitchen in the 1970's and 80's. Dottie Hope is the pen name Laurie adopts when she is 5 years old and writes letters to God asking for help and guidance in her tumultuous life. When her pool shark father, her hero, spirals down into an alcoholic and pill-popping haze it turns the family upside down, leaving a little girl few outlets for sanctuary. When she discovers the glamour of Studio 54 she is easily seduced into the chaos, befriending Andy Warhol and eventually becoming the first Fiorucci girl at 16 years old. She finally develops her own identity and builds confidence while cleansing herself from past demons--until it all suddenly comes back to her again.

But here is what you'll really see.

Laurie basically rips her soul out on stage and shows the audience the very best and worst of her life growing up here in New York.

You'll see her beating and bloody heart being twisted and tormented by people in her life who should know better, but also elation and raw uplifting quirkiness that just makes you smile.

For 90 minutes you will be transfixed how one person is able to switch in an instance from a monologue to a dialog between two characters and totally be transfixed and absorbed in a way where you believe both people are there on stage in front of you.

You get to see someone act in a way that is rarely ever seen and in such a small intimate theatre it's truly an experience. What makes it more unusual is to see it being performed by an 'unknown' (though how long that continues to be the case remains to be seen).

Laurie lived 'an interesting life' in the 70's and 80's experiencing all that New York had to offer, watching her recreate scenes effortlessly you'll be transported to a time where people made statements just in their existence.

You can check out more at http://www.dottiehope.com/ but as there are only 3 more shows try to get to see one of the performances in case they don't extend the performance for a longer run.