Email ThisBlogThis!Share to TwitterShare to FacebookShare to Pinterest
It was an interesting mix of Australian companies to pitch yesterday at the 2010 Austrade / AIMIA Digital Media Showcase.

Pretty much a cross section of new media / tech / agencies each with their own spin and levels of international experience.

I think the most interesting for me personally would have to be http://www.e-diary.com/ , basically an app targeted at commercial entities such as AFL, NBA etc  to deliver fully formed html pages directly into an end users outlook/mac etc (didn't mention gmail?) calendars for an entire seasons games including hyperlinks for online seat purchase, fan gear purchase, etc 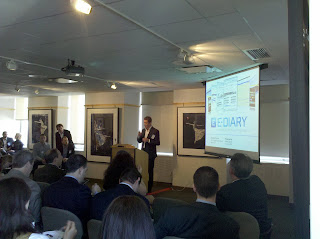 Unfortunately i found out that the product is purchased as a "agency service" rather than something that is licensed on a SAAS basis so agencies/entities here in the USA cant yet license the tools to do the work themselves but still a very interesting concept that has lots of potential.

http://www.netventures.com.au/ also had a pretty straight forward video streaming proposal (but very successful with some major names in Australia) until they showed some of their neat end user video mashup tools. Basically anyone looking to offer end users the ability to edit video content and the serve up the resulting edits to a fan community, should check them out.

They were also super excited about the ability to stream video content across multiple platforms with the ability to pickup where you left off, eg watching something at home on the pc, then jumping onto your cell for the commute to work without needing to find the location you left off.....nice but i figure this is hardly a game changer... as long as fast forward works easily enough.

NetVentures also mentioned that they have just released their iPad toolkit for publishers looking to offer video onto this platform (uggh it’s a virus and already infested Australian agencies :) .

Like always i was disapointed to hear that some of the presenters are staying in New York... all the way until Sunday... (sarcasm) but that some were planning on spending more than a few weeks for follow up meetings.

I've said it before and I'll say it again - if you are going to sign up for this trade mission you have to plan on spending a month here at a minimum and you have to hit the phones to make appointments before you arrive, hit the phones while you are here, and hit the phones after you return home. Australia is a long way away and you have to have something pretty special to remain top of mind here BUT if you do make the effort with the size of the USA market you can make it big time.

Just ask Antony Mcgregor Dey from http://www.qmcodes.com/ who pitched at last years Austrade trade mission and this year headlined his QR code technology at SXSW and is moving to NY permanently as of April this year.


Cheers,
Dean
Posted by Dean Collins at 9:40 AM