Email ThisBlogThis!Share to TwitterShare to FacebookShare to Pinterest
We went to see Hanna last night http://www.imdb.com/title/tt0993842 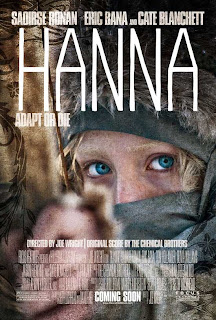 Had potential but in the end what a piece of junk, worth watching on cable but not worth going to the movies to see (even with the stunning scenery).

As for the "missed your heart" scene at the end wtf was that junk about? did the directors/editors get bored and just go lets do it this way and go and get pissed at the wrap party - though it could have been editing issues with the footage they had left?

Other plot holes you could drive a truck through about not only better ways to achieve to assassination but seriously, doesn't know how to use a light switch but then jumps onto a computer to research DNA - give me a freaking break.

Would i watch it on tv again, maybe - am i pissed i paid to see it at the movies, yep. mainly because it could have been a much better movie and had potential for second or third sequel and some of the scenes/filming were just amazing.