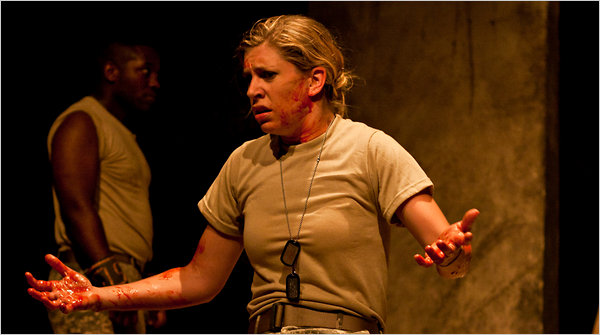 The Flux Theatre Ensemble is one of the things in New York that make me never want to leave.

In a shitty lower east side building in what can best be described as a big black empty room with minimal props and home made stadium seating with really uncomfortable chairs they put on some of the best theatre I've ever seen (I saw Dog Act here back in Feb 2011).

Last night i got to see Ajax in Iraq, telling two stories in parallel, soldiers in Iraq against the battles of the ancient Greek gods.

I do think the play could be edited down by about 15 minutes though....or find a theatre with real seats.... but for 2 hours you hear nothing and see nothing but the raw emotion of acting sans almost all props, it put most tv i watched this week to shame and for $12 was a bargain.

It would be easy to say something snappy about the depiction that war is always SNAFU but why dont you go and see it and post your own thoughts. Last night had less than 25-30 people in the audience (for a cast of 10+). It's crazy people pay $100-200 a ticket for broadway when off off broadway is where the real acting is sometimes at.