Email ThisBlogThis!Share to TwitterShare to FacebookShare to Pinterest
There is a fantastic class that is taught at NYU called the ITP, it's one of the only the only classes that make me really want to go to Uni and study.

So I've been talking with people attending and teaching in the class about various 'work product' projects (probably the best way to describe it), one of last years students I'm actually trying to help commercialise through people I know - I'll post about it once he makes his first sale which should be fairly soon (and fairly visible).

Anyway last night they held an exhibition http://itp.nyu.edu/shows/winter2007 that i dragged Jodie along to on the promise that there would be a lot of 'art like projects' rather than just all IT geeky stuff.

Turns out we had a fantastic time. Everything I hoped for about really smart people looking at various ways computing and technology can affect our lives without concentrating on the technical side but more the personal interactions with the concepts.

I saw at least 7 or 8 demonstrations that had commercial applications, 2 of which I'm going to be making a proposal to the students on how I can help them commercialise what they have created.

One of them I'm so excited about I'm not telling anyone the concept as I think it rocks and has major major potential - I've already been on the phone today with potential partners where I think it has application. (no the photo I took isn't included in the ones below :)

A couple of projects I took shots of 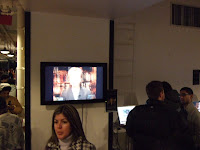 Video overlay of 3 seperate Hillary Clinton interviews from 3 seperate tv channels.
Using a 3 dial modulator you could wind in or out the image of all 3 displays.
Yes she pretty much said word for word the same thing on 3 channels. 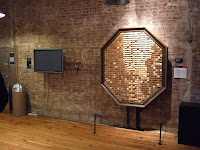 Octagonal 'scultpture' that could change 'contrasts' by flipping small tiles attached to motors.
The tiles however were controlled by a microprocessor to form certain images.
Here's the kicker, hidden in the very center of the sculpture is a small ccd camera, what the sculpture 'sees' it tries to arrange the tiles to reflect.
This would be an outstanding focal point in an office lobby. 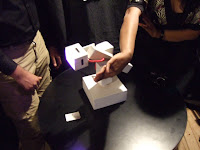 Robotically controlled lamp.
By placing your hand near the lamp 'head' the unit is attracted to your hand.
Seems as useless as a remote control until you realise ...yep there are people who would like that functionality.


Like I said lots of very cool stuff, neither of the two I'm hoping to work with are listed above but if you are in NY you should try and get invited along to the next event.