You Too can win You Tube millions.... 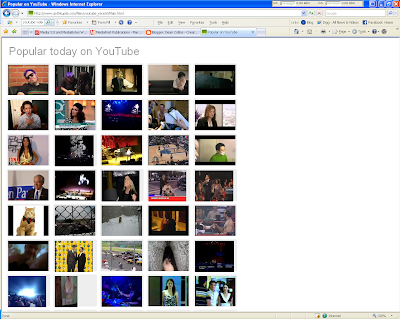 http://www.shellypalmermedia.com/2007/12/11/youtube-vudu-nytimescom-tv-guide-viacom-mediabytes-12112007/
YOUTUBE has opened its revenue-sharing program to the general public and is accepting applications on YouTube.com. The site will only grant “partner” status to frequent contributors that have built up a YouTube audience while not violating the site’s terms of use. YouTube says partners with over a million views are earning thousands of dollars per month using the program.

And
http://publications.mediapost.com/index.cfm?fuseaction=Articles.showArticle&art_send_date=2007-12-11&art_type=37
YOUTUBE VIDEOS INSTANTLY TURNED WILLIAM Sledd, a Gap store manager in Paducah, Ky., into the hottest style guru on the Internet. Now with almost 60,000 subscribers and millions of views, this YouTube blogger turned Internet celebrity is the owner of the fourth most popular channel on YouTube. He has a growing coterie of famous friends and development deals in the works with mainstream media outlets like NBC. He has even begun his own Web site and t-shirt company.

Come one come all, step right up - you too can share in the YouTube millions.
I guess someone at YouTube finally sobered up from spending their 1.6Billion dollar payout and realised watching skateboarders cracking their nuts is only funny for so many months and that it was time to grease the content acquisition funds (albeit poorly).

Cheers,
Dean
P.S. I'm actually very pro youtube and yes I know there is other content on the site but I'm a little disappointed at the "lack of formality" around the partnership agreement. Want to see how it should have been done/could have been done - read this post.
Posted by Dean Collins at 4:06 PM