Email ThisBlogThis!Share to TwitterShare to FacebookShare to Pinterest
A friend of mine Scott Shaffer posted this on his blog today
The "GiFi" was unveiled today at the Melbourne University-based laboratories of NICTA, the national information and communications technology research centre.The tiny five-millimeter-a-side chip can transmit data through a wireless connection at a breakthrough five gigabits per second over distances of up to 10 meters. An entire high-definition movie from a video shop kiosk could be transmitted to a mobile phone in a few seconds, and the phone could then upload the movie to a home computer or screen at the same speed.
More here... http://theponderingprimate.blogspot.com/2008/02/10-revolutionary-wireless-chipbye-bye.html 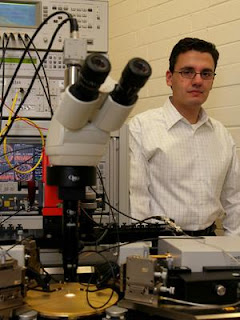 Woot go aussies :)
As some of you may know the mimo capabilitie of 802.11n was developed by another group of aussies at the csiro.
What is it about aussies and wireless huh.