Email ThisBlogThis!Share to TwitterShare to FacebookShare to Pinterest
So today is the day that the USA G-men get to 'catch up' to the Chinese and blow a satellite out of the sky.

The chinese blew up an old satellite last year and were chastised heavily about it....for creating an armed space race.

It was nice that an American satellite became 'faulty' so soon thereafter and rather than allow it to crash and burn up over the ocean they get to blow something of their own up. (the earth is 70% water you know and the chances of any problems or even if it did hit land on the other 30% the chances of it hitting populated land are slim).

So I found it funny today when watching CNN and was told......even though there is no danger in firing a live missile into space.....that they are going to wait for the shuttle to land first. 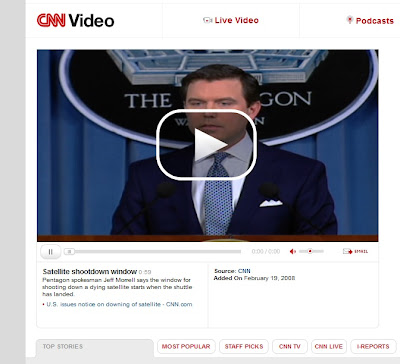 
Cheers,
Dean
Posted by Dean Collins at 6:37 AM