Email ThisBlogThis!Share to TwitterShare to FacebookShare to Pinterest
He had been sneaking around like a noir hero for two and a half weeks, finding new and shadowy exits to his regular places. He was tired from lack of sleep, and while it was early yet, he was looking forward to a stiff cocktail when he got upstairs.

Mr. Deane, a freelance audiovisual technician, was becoming a player to be reckoned with in this year’s StreetWars tournament. With only a few days left, he stood a fighting chance at being the last person standing, the $500 prize in one hand and his dripping gun in the other. But with the pool dwindling, his own would-be killer could not be far. 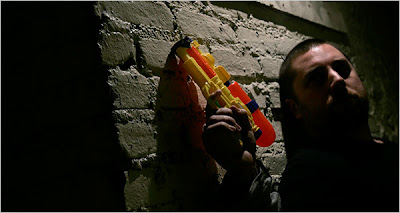 How sick is this - No i didn't know about it otherwise I would have definitely been involved.

Next event in New York is June 2009 http://www.streetwars.net/nyc2009-signup.php so until then this video will have to sate your appetite.