Email ThisBlogThis!Share to TwitterShare to FacebookShare to Pinterest
lol - this is going to get nasty.

http://mashable.com/2009/03/02/skittles-social/
Many companies are starting to realize that whatever content they offer online still can’t match the various social media offerings out there, where the community contributes to the whole.

Few, however, have taken it so far as candy maker Skittles, which replaced its entire homepage with its Twitter stream. The only thing that’s left is a widget-like navigation console in the upper left part of the screen, but lo and behold: instead of pointing you to some company PR nonsense, it sends you to the Skittles entry on other popular social destinations: Wikipedia, YouTube, Flickr. 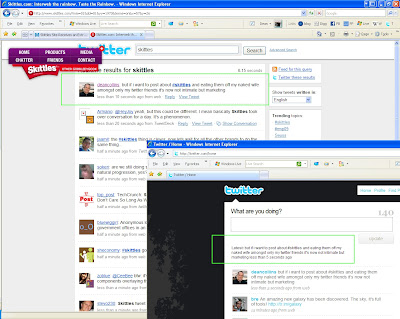