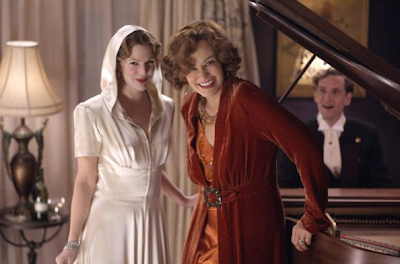 We just watched the 2009 movie version of Grey Gardens.

Based on the life stories of the eccentric aunt and first cousin of Jackie Onassis (both named Edith Bouvier Beale aka "Big and Little Edie") raised as Park Avenue débutantes but who withdrew from New York society, taking shelter at their Long Island summer home.
http://www.imdb.com/title/tt0758751

Amazing and sensational, both Drew Barrymore and Jessica Lange give a performance that rips at your heart and makes you smile at the same time.

Watching this self controlled train wreck of a sitatuation unfold makes you look at your life and wonder about "the choices you make to be happy - but are you really happy, and if not why not".

Whoever did the makeup in the movie deserves an academy award, along with the acting I almost never 'saw' Drew Barrymore the person but 'Little Edith Bovier Beale' the character.

BTW check out the photos of Jessica Lange at the premier 'va va voom' for 60 in comparison to how she looks in the movie.

I'd love to see the original documentary, hopefully Time Warner will do a special run of it.