Email ThisBlogThis!Share to TwitterShare to FacebookShare to Pinterest
This cant be right can it?

I got a notice on one of my twitter accounts that "WalMartShop" is following me on Twitter? 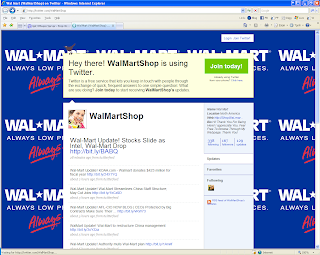 Ant the link http://shopwalmartonline.blogspot.com/ leads to a site with more Walmart content and ads.

If you are going to set up a scam site why the heck would you use Walmart as your target?

Expect the fail whale to be appearing a lot next week as a million housewives across the USA run out to immitate.