Email ThisBlogThis!Share to TwitterShare to FacebookShare to Pinterest
Pretty much zero damage in our street but 1 block over on Hicks St between Clark and Love Lane this monster.
Basically i blame the building owners for not trimming the branches considering the limited size of the root mass in the front courtyard area, the thing was probably so top heavy that it didn't take much wind to blow over a saturated wet green mass when the soil holding the roots was wet.

BTW anyone whose property was damaged that is reading this....the co-op just spent a few months relaying the concrete in the front courtyard from the street to the entryway right next to the roots, not saying this caused the problem but lets just say it probably didn't help. 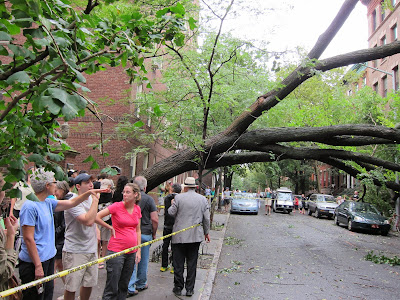