Amanda Palmer and the GTO

Email ThisBlogThis!Share to TwitterShare to FacebookShare to Pinterest
Amanda Palmer with her GTO iteration were at Williamsburgh Music Hall last night.

A great mix of old tracks and some tracks off the new GTO album (hearing "The Bed" for the first time made Jodie cry....lol not unusual event, but an example of how when you are open as a performer, you can really touch your audience). 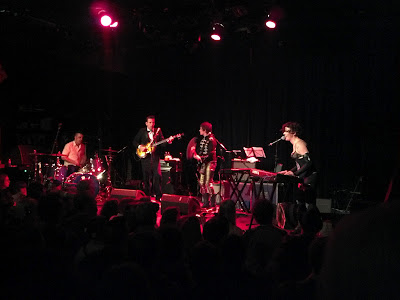 Was a fantastic concert throughout the night but when they did the encore they really blew the roof off (the video is shaking because the section we were standing in was moving around so much), David Byrne (who also did a cameo with the Jherek Bischoff support set) came out and did a rendition of Burning Down The House with a fat horn section, there wasnt a single person not dancing out the doors and up the street afterwards.

She's going to be touring again in the Fall...I'll be back.