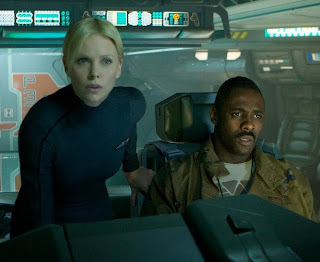 What a shit job with this installment in the Aliens film family.


i mean seriously it should have been called..."lets fly 5 billion miles and fuck"

Any self respecting scientist watching this movie must have been hurling obscenities at the screen with their lack of scientific protocols.

yes lets go out and drag this thing back into the ship with no concerns about contamination protocols, and yes lets have sex right now because lets face it i've been asleep for 2 years and 4 months and if i'm going to pay Charlize Theron to be in my film i want to see her naked on set.

....here lets build this super cool looking automated surgery cocoon BUT we are going to lift out the fetus with what looks like a grappling hook from a carnival booth.

I could excuse this for a small budget film but these guys had money to burn and shows the total lack of storytelling capabilities but reliance on fancy computer generated special effects.

As for the ripping off the head of the Android and having it talking ARE YOU FREAKING KIDDING ME???? that was cool in 1979 for obvious reasons, doing it in 2012 shows that Ridley Scott is a has been and deserves to never work again.

Prometheus was as shoddy a money grabbing sequel attempt as I've ever seen, the real shame is with a few minor tweaks it could have been amazing.
When Prometheus 2 is released (oh yeh how obvious was that little setup at the end) i'm going to keep my $20 and watch the 1979 original knowing i had the better night compared to the other suckers.